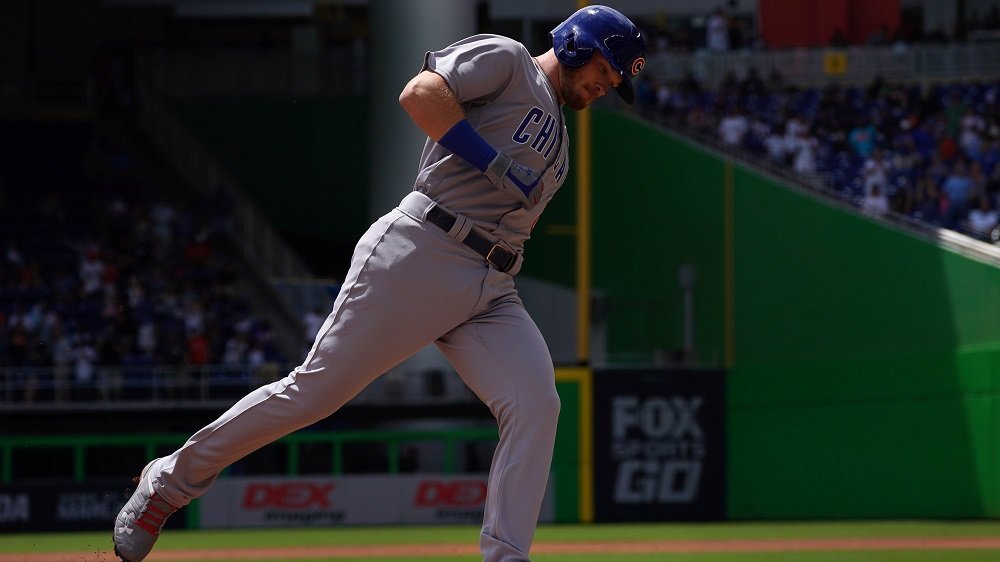 Making a statement in the leadoff spot, Ian Happ crushed a no-doubter on the first pitch of the game. (Photo Credit: Jasen Vinlove-USA TODAY Sports)

MIAMI — Picking up right where they left off last season, the Chicago Cubs were homer-happy on Opening Day, knocking three dingers out of Marlins Park as part of a convincing season-opening triumph over the Miami Marlins. Catalyzed by a home run on the first pitch of the ballgame by new leadoff man Ian Happ, the Cubs outslugged the Marlins 8-4 to start the 2018 slate out on the right foot, using two different three-run innings to earn the victory.

Becoming the first player to hit a home run on the first pitch of an Opening Day game since Kazuo Matsui did so for the Houston Astros in 2004, Happ jacked a no-doubter to right to start the afternoon's action on Thursday, leading to a difficult outing for Marlins starting pitcher Jose Urena. Urena never recovered thereafter, giving up five runs on six hits and four walks.

Let's settle in and enjoy the first pitch of the 2018 @MLB seaso-- pic.twitter.com/VdNov3BeTx

Cubs ace Jon Lester did not fare much better, as Opening Day proved to be a hitter's war, with the starting pitchers facing the brunt of it. Lester was taken to task in the early goings and made it through just 3.1 frames before exiting with four runs charged to his name. Lester was bailed out, however, by a nine-hit effort from his teammates at the plate.

Urena, perhaps suffering from Opening-Day jitters, was woeful in the first inning, allowing the Cubs to rack up three runs due in large part to three hit batters. Struggling with his command down 1-0, Urena brought in Cubs third baseman Kris Bryant on a bases-loaded walk to place the Marlins into an 0-2 deficit and proceeded to bring Chicago first baseman Anthony Rizzo home on a bases-loaded HBP.

Playing inspired baseball on the day, Rizzo, a graduate of Stoneman Douglas High School, was assuredly motivated like never before to perform for his hometown and alma mater on Opening Day. Donning Stoneman Douglas warm-up shirts and jersey patches, the Cubs showed solidarity that made Rizzo's second-inning solo shot to right all the more meaningful.

A 393-foot blast, Rizzo's home run put the Cubs up 4-1, as the Marlins tacked on a run in the bottom of the first when former Cub Starlin Castro came in to score for Miami on an RBI single from Brian Anderson. Despite the momentum garnered by the Cubbies off of Rizzo's moonshot, Miami proceeded to even the score in the bottom of the third with a three-run barrage off of Lester.

Incited by a leadoff triple from left fielder Derek Dietrich, who went 2-4 at the plate, Miami knotted the game up at 4-4 in the third. An erroneous error committed by Cubs left fielder Kyle Schwarber did not help matters for Chicago, as it enabled Castro to score his second run of the day on a shallow single by Anderson. However, the Cubs quickly retook the lead in the top half of the next inning via two doubles. Third baseman Kris Bryant, who doubled with one out, was plated by a clutch two-out double from catcher Willson Contreras.

Former Marlins reliever Steve Cishek came through for his new club, the Chicago Cubs, in the bottom of the fourth, earning two outs after relieving Lester to get the Cubs out of a precarious situation. Cishek, who allowed just one hit in 1.2 innings on the hill, earned the win for his efforts.

Chicago effectively put a bow on the win in the top of the seventh with a three-run output. Schwarber, making up for his gaffe in the field, smashed a solo jack off of Tayron Guerrero, providing the Cubs with a two-run lead.

He might not be able to play a good left field, but Kyle Schwarber can sure hit. #Cubs pic.twitter.com/I9YkgPDGA2

Later in the inning, following a catcher's interference that advanced Cubs right fielder Jason Heyward to first base and a stealing of third base by shortstop Addison Russell, the Cubs went up 8-4 on a two-run double to deep right from utility-man extraordinaire Tommy La Stella.

Urena received the loss for his troublesome appearance, as the Cubs accrued the 8-4 win by way of an impressive offensive showing. Perhaps making a statement on the impact that he will have as the new leadoff hitter for the Cubs, Happ set the tone with his first-pitch bomb, and the Cubs never looked back. Also of note, Russell went 2-3 at the dish, and Bryant and Rizzo each scored two runs to aid the Cubs in their progression to a 1-0 record on the young season.