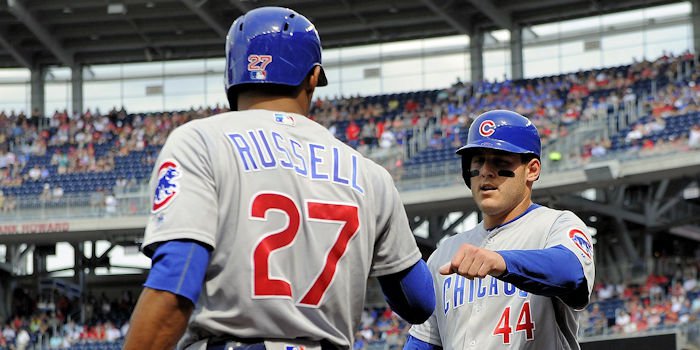 WASHINGTON – Staring down the barrel of yet another series loss on the road, a three-run rally in the ninth, all with two outs, lifted the Cubs over the Nationals, 5-4. Felix Pena earned his first career win and Wade Davis picked up his 16th save of the year.

Jon Jay and Ian Happ had back-to-back strikeouts in the first inning before Anthony Rizzo deposited a ball in the right field corner. Willson Contreras singled him home, and was promptly thrown out at second base trying to stretch it.

Ryan Zimmerman answered the call in the bottom of the first, doubling in Bryce Harper who walked the at-bat before.

Nothing happened offensively for quite a while after. Jon Lester looked sharp giving up just two hits and two walks after the first inning as well as accruing seven strikeouts. Lester had some trouble with getting the low strike call for most of the ballgame which limited his effectiveness early on.

Jeimer Candelario hit his first career home run off of Joe Ross out into right-center field.

When asked about Nationals Park, Cubs pitching coach Chris Bosio remarked that right-center had the most carry of the entire field.

The bottom of the seventh featured the National League’s best offense doing what they do best. Carl Edwards Jr. relieved Lester to start the inning and pitched a leadoff walk to Daniel Murphy.

Edwards tried to get Anthony Rendon to chase his curveball in the dirt on 2-2, but he did not bite. Instead of trusting his stuff and turning to it again, Edwards instead opted for a high zone fastball. Rendon made him pay by scorching the ball over the left field fence to give the Nationals the lead by one.

Brian Duensing relieved Edwards and then Pedro Strop relieved Duensing after one batter. With the bases loaded, Strop gave up a single that scored just one as Adam Lind put the brakes on at third. Strop got Bryce Harper to strike out and forced Zimmerman to ground out.

The eighth inning came and went quickly and quietly. The ninth seemed it would be that way as well. Blake Treinen relieved Joe Blanton and struck out Russell. He gave up a hit-by-pitch to Candelario, but got him out next on a fielder’s choice by recent call-up Victor Caratini.

Caratini took second without a throw, and Javy Baez made sure he advanced to third by ripping a single into right field. Tommy “3 AM” La Stella came up to bat for the pitcher, Pena. A slap single just barely over the head of shortstop Stephen Drew scored Caratini as Baez made his way to third. Jon Jay sealed the deal with a triple into the alley between right and center that scored both Baez and La Stella.

Wade Davis retired the side quickly making short work of the Nationals’ bottom of the order.