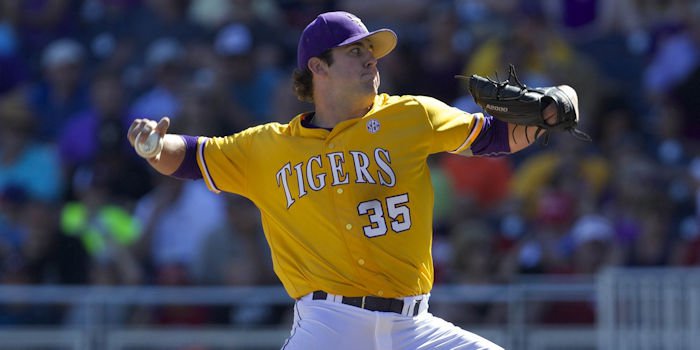 CHICAGO – The Chicago Cubs tonight selected left-handed pitcher Brendon Little out of the State College of Florida, Manatee-Sarasota in Bradenton, Fla., with the 27th overall pick and right-handed pitcher Alex Lange out of Louisiana State University with the 30th overall pick in the 2017 Major League Baseball First-Year Player Draft.

“We were looking for impact with our first two selections, and not force the issue with the need for pitching. The way the names were falling on the board, we were excited to have our two guys still there,” said Jason McLeod, Senior Vice President of Scouting and Player Development.

“Brendon Little is a physical left-handed pitcher who we feel is just tapping into his potential now, with a fastball in the low-to-mid 90s and what we believe to be one of the best curveballs in the Draft,” McLeod added. “Alex Lange is a proven winner in the best conference in college baseball. He’s taken the ball every Friday night for a top caliber team and he is one of the best competitors in the country.”

The six-foot, two-inch 215-pound Little had seven 10-strikeout games in 15 outings, including 15 strikeouts and no walks, March 29 vs. South Florida State College. That outing began a three-start stretch in which he struck out 35 and walked just two in 20.0 innings from March 29-April 10. He later struck out 13 and walked none, April 21 against Polk State College.

Little is a graduate of Conestoga High School in Berwyn, Pa., and was the second-best junior college player available in this draft according to Baseball America.

Lange, 21, is in his junior season at Louisiana State University, pitching to a 2.92 ERA (36 ER/111.0 IP) in 17 starts for the Tigers, who have advanced to the College World Series for the second time in his three seasons. The right-handed pitcher has gone 9-5 with four complete games this season, leading the Southeastern Conference with 134 strikeouts. He started Game One of LSU’s Super Regional vs. Mississippi State this past weekend, striking out 10 batters while allowing three runs in 7.2 innings in the Tigers’ 4-3 victory.

A native of Lee’s Summit, Missouri, Lange has gone 29-9 with a 2.88 ERA (108 ER/337.0 IP) in 51-career starts over three seasons at LSU. He ranks second in program history with 390 strikeouts, just 19 shy of the program record. He has earned numerous awards and recognitions in his three years with the Tigers, including the 2015 National Freshman Pitcher of the Year (Collegiate Baseball), 2016 First-Team All-American and 2017 Second-Team All-American.

Lange graduated from Lee’s Summit West High School where he was named the 2014 Missouri Gatorade Player of the Year and a Perfect Game All-American.

The 2017 Major League Baseball First-Year Player Draft continues this evening with the second round, in which the Cubs have pick No. 67. The draft continues tomorrow with rounds three-though-10 and concludes Wednesday with rounds 11-through-40.

Smiles and claps for Alex Lange as Cubs picked him. #LSU