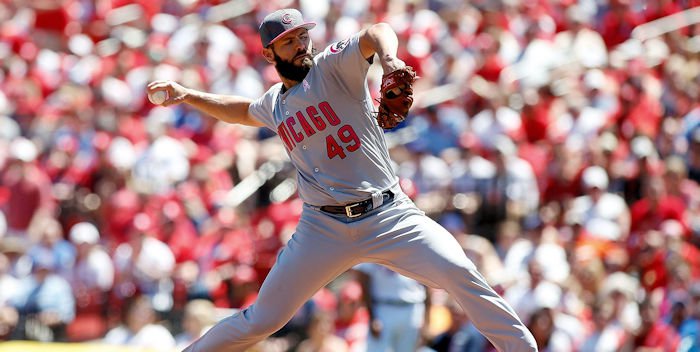 ST. LOUIS -- Limited to just four hits on Sunday, the Cubs dropped the second game of three to the Cardinals losing 5-0. Adam Wainwright (3-3, 5.31 ERA) earned the win spinning seven shutout innings, the longest start of the season for him. Kris Bryant sat out for his third straight game with a stomach flu as the offense continued to struggle. Ian Happ started his second game of the season in right field as a couple of Cubs outfielders continue nursing injuries.

Jake Arrieta (4-3, 5.44 ERA) was charged with the loss after he gave up two 2-run homers to Matt Carpenter and Yadier Molina early in the ballgame. Today, Yadier Molina experienced his first multi-homer game since August 2011, when he hit two long balls against the Cubs at Wrigley Field. Carpenter's home run was his first hit against Arrieta in the regular season, and it broke a 0-for-28 streak. That is the fourth longest hitless streak of a hitter against a pitcher to start a career since 1974.

The Cubs will go home for a lengthy period of time and are slated to face the Reds, Brewers and Giants. The Giants should be especially helpful to the Cubs as they are currently one of the worst teams in the National League.

Monday’s pitching matchup is going to be Bronson Arroyo (3-2, 5.94 ERA) against John Lackey (3-3, 4.29 ERA). Big John had a great outing last week against the Rockies and his ERA could benefit from another strong outing at Wrigley.