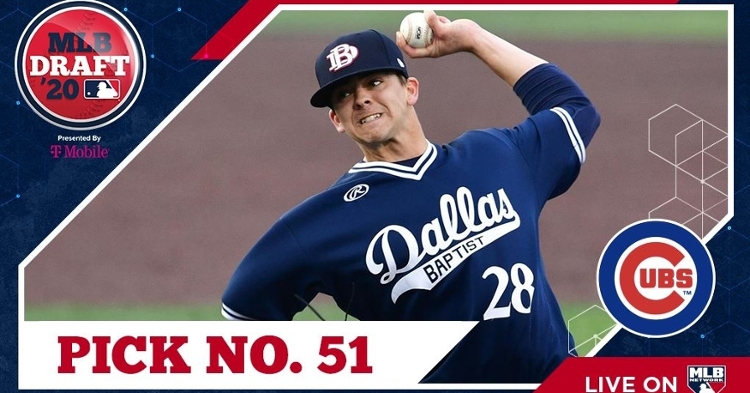 Carraway is a talented pitcher that the Cubs picked

CHICAGO – The Chicago Cubs today announced they have signed three of their selections in the 2020 Major League Baseball First-Year Player Draft, including left-handed pitcher Burl Carraway out of Dallas Baptist University (second round), left-handed pitcher Luke Little out of San Jacinto College North (fourth round) and right-handed pitcher Koen Moreno out of Panther Creek (N.C.) High School (fifth round).

The signing of shortstop Ed Howard out of Mount Carmel High School (first round) was previously announced on Monday.

The six-foot southpaw was named First Team All-Missouri Valley Conference as a sophomore in 2019, going 4-2 with a 2.81 ERA and a team-high six saves. He struck out 15.72 batters per nine innings, the second-best single-season mark in school history. Following the collegiate season, he pitched with the U.S. Collegiate National Team.

A native of College Station, Texas, Carraway graduated from A&M Consolidated High School where he was a three-time All-District selection.

A native of Matthews, N.C., Little graduated from East Mecklenburg High School in Charlotte, N.C., where he was a 2018 Perfect Game pre-season All-American.

It’s official! @Luke_L23 is now a member of @Cubs organization. A dream come true. God is great! We want to thank everyone who has helped him along the way. But, this is only the beginning. There’s more work to do and he’s ready! Go Cubs! @OctagonBaseball pic.twitter.com/ELZJFUHsdW

Here is a look at Chicago’s selections from the 2020 First-Year Player Draft, with the players currently having signed in bold: