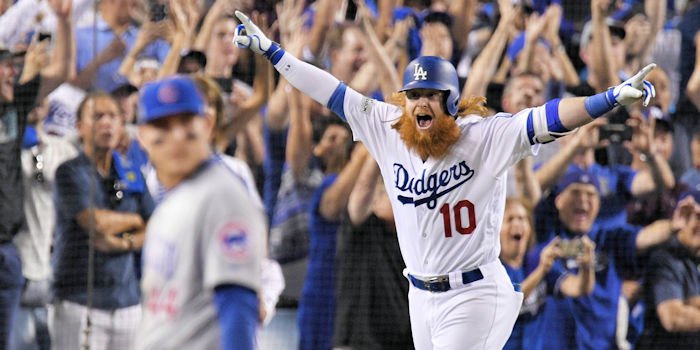 Although an injury did not play a factor, Justin Turner chanelled his inner Kirk Gibson with the walk-off homer. (Credit: Hanashiro-USA TODAY Sports)

LOS ANGELES – On the 29-year anniversary of Kirk Gibson's legendary walk-off homer, one of the iconic moments of Los Angeles Dodgers lore, Dodgers third baseman Justin Turner harkened back to that moment via a walk-off shot of his own. With a three-run shot, Turner went yard in the bottom of the ninth to provide the Dodgers with a 4-1 win that put them up 2-0 in the NLCS over the Chicago Cubs.

Struggling at the plate for the second straight game, the Cubs wasted a quality start from lefty Jon Lester on the hill, as they failed to experience much success against former Cubs and current Dodgers starter Rich Hill. With just three hits on the day, the Cubs were lucky to have an opportunity to win, but the Dodgers, who amassed five hits overall, ended the Cubs' hopes in heart-wrenching fashion.

Hill, who once started a playoff game for the Cubs in 2007, made the most of his start, striking out eight and giving up only three hits in five innings pitched. He found himself in a jam just once in the early goings but was able to get out of it.

In the top of the third, Cubs second baseman Javier Baez, who has been struggling mightily at the plate this postseason, earned a walk to start the inning and reached third base soon after by way of a stolen base and a wild pitch by Hill. Standing at third with one out, Baez never reached home, however, as the Cubs failed to hit the ball out of the infield for the remainder of the inning.

The Dodgers also failed to convert on a decent scoring opportunity in the third, as rookie sensation Cody Bellinger doubled to left with a runner on first to place two runners in scoring position. But Lester was able to force an inning-ending fly-out in the next at-bat.

Lester lasted 4.2 innings before being pulled with 103 pitches under his belt. Lester gave up three hits and five walks white striking out two. He was bailed out again in the fourth when Cubs catcher Willson Contreras and Baez combined to catch the Dodgers' Yasiel Puig attempting to steal second, but Lester was not so lucky in the fifth. For what it is worth, though, neither was Hill.

With his first home run of this year's playoffs, Cubs shortstop Addison Russell, who has been a spark plug as of late, drilled a Hill fastball 358 feet over the wall in left to lead off the fifth. Interestingly enough, the home run moved Russell into first place all-time for RBI accrued by a Cub in the postseason, giving him 19 overall. But, after the blast by Russell, the Dodgers were quick to respond, as L.A. shortstop Charlie Culberson led off the bottom half of the fifth with a double to center.

Two at-bats later, Culberson advanced to third on a grounder, setting the stage for Turner to produce in the clutch for the first time in the contest with a two-out RBI single to right. Lester was pulled soon after with the game knotted up at 1-1, and recently-maligned reliever Carl Edwards, Jr., entered the game for Chicago. Edwards, Jr., was solid on the evening, pitching 1.1 innings of shutout ball.

In fact, both bullpens were solid in general during the build-up to the Turner walk-off, with the first hit following the RBI single by Turner not coming until the bottom of the eighth. It was then that Bellinger, who went 2-3 on the day, beat out an infield single to second, taking advantage of Cubs reliever Brian Duensing dropping the throw from Baez while attempting to tag first base.

Thereafter, Bellinger took second on a sacrifice bunt, but, later in the inning, Duensing escaped unscathed on a groundout by Dodgers catcher Austin Barnes that resulted in a double play to usher in the ninth inning. The Dodgers then opted to bring closer Kenley Jansen into the game in the ninth, and although he hit Cubs first baseman Anthony Rizzo to put a runner on first with one out, Jansen was never threatened.

Duensing returned to the game in the bottom of the ninth and walked Puig in four pitches to begin the inning, and, after Puig advanced to second a sacrifice bunt, Duensing collected a critical strikeout. However, Cubs skipper Joe Maddon then opted to pull Duensing in favor of regular starter John Lackey, who made his second straight appearance out of the bullpen.

It was somewhat surprising that Lackey entered the game instead of closer Wade Davis, and Maddon and the Cubs paid for the risky move, as Lackey walked a batter and then gave up the aforementioned walk-off homer to give the Dodgers a 4-1 win. Turner, who went 2-4 with four RBI in the contest, provided the Dodgers with a commanding 2-0 lead in the NLCS, placing the pressure squarely upon the Cubs as the series transitions to Wrigley Field for at least two games.

Although Lackey was ultimately to blame, Duensing received the loss to fall to 0-1 this postseason because he walked Puig, who scored the winning run. The winner in the game was Jansen, making him 1-0 in these playoffs.

Considering that the Cubs garnered a meager three hits, one of which was by Lester, the offense, or lack thereof, was primarily to blame for the defeat. But the decision by Maddon to use Lackey, who had never before pitched on back-to-back days in his career, in a tight spot in the ninth brought with it plenty of blame following the walk-off.

Speaking on the decision to not use Davis in the ninth, Maddon said postgame, "I needed him for the save tonight. There was no way he was pitching more than one (inning)."

While that pitching decision could come back to haunt the Cubs, if Chicago's hitting does not improve in the Windy City, the Cubs' season will be over rather soon. Game 3, which is slated for 8:00 PM CST at the Friendly Confines on Tuesday, will feature a pitching matchup of the Dodgers' Yu Darvish and the Cubs' Kyle Hendricks.