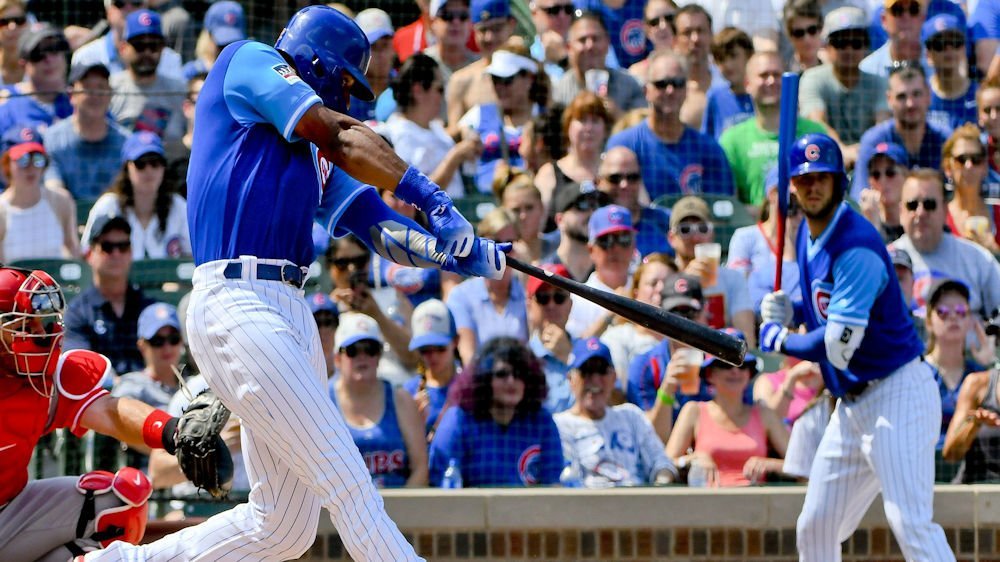 CHICAGO — Capping off an impressive four-game sweep in dominant fashion, the Chicago Cubs (76-53) skunked the Cincinnati Reds (56-75) by a final score of 9-0 on Sunday, limiting the Reds to just three hits in a lopsided victory that secured the Cubs' first four-game sweep of the Reds at Wrigley Field since 1945. Amassing 13 hits, the Cubs' offense was spectacular in the series finale, and Chicago's pitching stood out, too. Cubs starting pitchers sport an ERA of 1.67 with no home runs allowed in Chicago's past 10 games, which is a major factor behind the North Siders' current five-game winning streak.

The Cubs wasted no time in taking full control of the ballgame, as they pushed three runs across in the opening frame. A throwing error by Reds shortstop Jose Peraza on an attempted force out at second base culminated in the Cubs experiencing a big inning. Chicago catcher Willson Contreras brought second baseman Daniel Murphy, who led off with an infield single, in to score for the first run.

Right fielder Jason Heyward then jacked a stand-up triple to deep center field that plated first baseman Anthony Rizzo. Heyward, who went 4-4 with three runs scored and two RBI, produced his fourth four-hit game of the season after not experiencing any such games last year. Putting a bow on the three-run opening inning, rookie third baseman David Bote tallied one of his three RBI on the day with a two-out single to right field that scored Heyward.

Bote's most critical two-out hit of the game came a few innings later, when he skied a 451-foot bomb that sailed out of Wrigley Field and onto Waveland Avenue. A two-run shot that scored Heyward, Bote's sixth dinger of the season put the Cubs up 5-0 in the third. Bote went 2-4 at the dish on the afternoon. Two-out RBIs were a theme of the day for the Cubs. Heyward came up with one in the fifth on a single to center that scored Rizzo, who touched home plate three times in the contest.

Chicago added three more runs in the bottom half of the seventh to garner a nine-run advantage. Fitting with the Reds' lackluster performance throughout the series, Cincinnati reliever Robert Stephenson balked to usher Rizzo home because Reds first baseman Tucker Barnhart was not even covering the bag when Stephenson turned to make a pick-off throw.

Following the balk, the Cubs led 7-0 with two outs. After that, another two-out hit resulted in the Cubs going up 9-0, as left fielder Kyle Schwarber went yard for the second day in a row. A two-run bomb, Schwarber's dinger scored Heyward and marked Schwarber's 24th long ball of the season. The Cubs currently boast an 11-game homer streak, which is a season high for them.

Lost in the offensive firepower put on display by the North Siders on Sunday was the dominance of Chicago starting pitcher Kyle Hendricks, who was taken for just two hits and one walk in seven innings of work. Striking out five, Hendricks earned a winning decision for the fourth time in his last six starts and improved to 10-10 overall. For the Reds, starting hurler Homer Bailey saw his 2018 struggles continue, as he picked up the loss to drop to 1-12 after giving up six runs on eight hits in five innings on the hill.