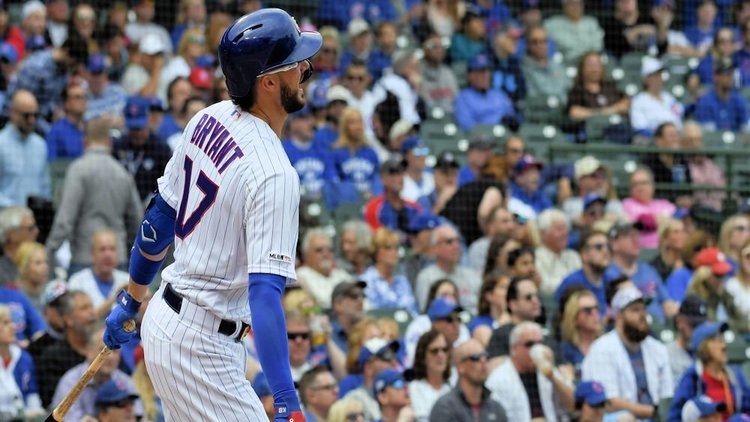 Kris Bryant hit one of two home runs tabbed by the Cubs in their series finale versus the Marlins. (Credit: Matt Marton-USA TODAY Sports)

CHICAGO, Ill. — After three straight matchups between the Chicago Cubs (22-13) and the Miami Marlins (10-27) featuring late-night, late-inning drama, the sunny series finale on Thursday afternoon was much less dramatic. Winning three out of four in the 4-game set at Wrigley Field, the Cubs topped the Marlins 4-1 in the final installment of the series, with a couple of home runs by sluggers Kris Bryant and Anthony Rizzo highlighting the victory.

Chicago took an early 2-0 lead off Marlins starting pitcher Trevor Richards. Bryant drilled a 416-foot solo shot to left in the bottom of the first to put the Cubs on the scoreboard. The dinger marked Bryant's fourth long ball in the past five games and his seventh overall. Later in the inning, Javier Baez drew a 2-out walk that was followed by two straight singles. The second single, which was hit by Albert Almora Jr., brought Baez in to score and put the Cubs up by two runs.

Yu Darvish started on the hill for the Cubs, and, although he struggled with his command at times and issued six walks in just four innings of work, he generally avoided giving up costly hits and struck out seven. The lone run allowed by Darvish came on a 2-out single by Rosell Herrera that scored Peter O'Brien in the top of the fourth. Darvish was able to make it through the fourth frame, but he was pulled after that, as he had thrown 97 pitches at that point. Fresh off the injured list, occasional starter Mike Montgomery relieved Darvish and proceeded to pitch five scoreless innings en route to collecting the winning decision.

The Cubs gained some breathing room by way of a 2-run shot off the bat of Rizzo in the bottom of the fifth. The power hitter had to go down on one knee in order to swing at a low curveball, but he was somehow able to drive it 422 feet out beyond center field. The 2-run shot scored Bryant, who walked in the preceding plate appearance, and served as Rizzo's 200th home run in a Cubs uniform. Rizzo went 2-for-4 on the afternoon and now has 10 home runs and 29 RBI on the season. With the 4-1 win under their belts, the Cubs have won 10 of their last 11 contests and have not dropped a series in over a month.