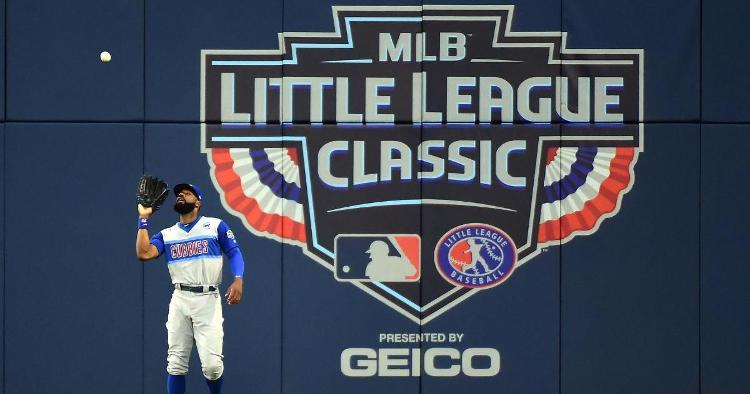 WILLIAMSPORT, Pa. — Playing in front of a crowd of little leaguers at BB&T Ballpark at Historic Bowman Field, the Chicago Cubs (66-58) and the Pittsburgh Pirates (51-72) squared off for the third annual MLB Little League Classic. The event was held near the site of the Little League World Series, and the little leaguers competing in Williamsport, Pa., made up the audience. Hitting three home runs and never trailing, the Cubs defeated the Pirates 7-1 in their MLB Little League Classic debut and thus claimed the rubber match of the 3-game series.

Nicholas Castellanos put the Cubs on the scoreboard with a solo dinger in the opening inning, as he went yard for the sixth time in a Cubs uniform with a shot to left-center in the top of the first. Speaking of uniforms, the teams wore customized jerseys for the special occasion, and the tops sported the nicknames that will be displayed on the Players' Weekend jerseys. Castellanos' jersey was donned with the nickname "Artist," but the true artist of the evening was Cubs starter Jose Quintana, who painted the corners and produced a masterpiece in his seven innings of work.

Continuing with his recent string of success, Quintana threw seven scoreless innings, in which he struck out seven, issued zero walks and gave up just five hits. Mitch Keller started on the mound for the Pirates, and he was shellacked in his 4 1/3 innings pitched, as he gave up six runs on seven hits and two walks. Jason Heyward smacked the second homer of the contest for the Cubs with a solo blast to left field in the top of the third, thereby putting the Cubs up 2-0, and Kyle Schwarber increased the Cubs' lead to four with a 2-run single in the fourth frame.

In the top of the fifth, the Cubs tallied three runs after Heyward led off with a double to deep right-center. A few at-bats later, Kris Bryant lofted an RBI 2-bagger to left that plated Heyward and resulted in a pitching change. Chris Stratton replaced Keller on the bump and, three pitches in, gave up a 2-run jack to Anthony Rizzo. The monstrous blast from "Big Rizz" clanged off the scoreboard beyond left-center and served as the Cubs' 50th opposite-field home run of the season, which leads the majors.

The Buccos avoided being shut out when Starling Marte took Cubs closer Craig Kimbrel deep on the first pitch of the bottom of the ninth. Fresh off the injured list, Kimbrel recorded a pair of strikeouts in his 15-pitch appearance. Cubs reliever Pedro Strop finished off the Pirates and wrapped up the Cubs' 7-1 victory, which was followed by both teams taking part in a handshake line together in the spirit of Little League. Technically, the win provided the Cubs with their first series victory against a division opponent on the road this season, with the Pirates serving as the home team on Sunday after hosting the first two games of the 3-game set at PNC Park.

Coolest moment of the #LittleLeagueClassic right as the game ends @Cubs and @Pirates line up at home plate to shake each other's hands. #GoCubsGo pic.twitter.com/6KwjxmuFet