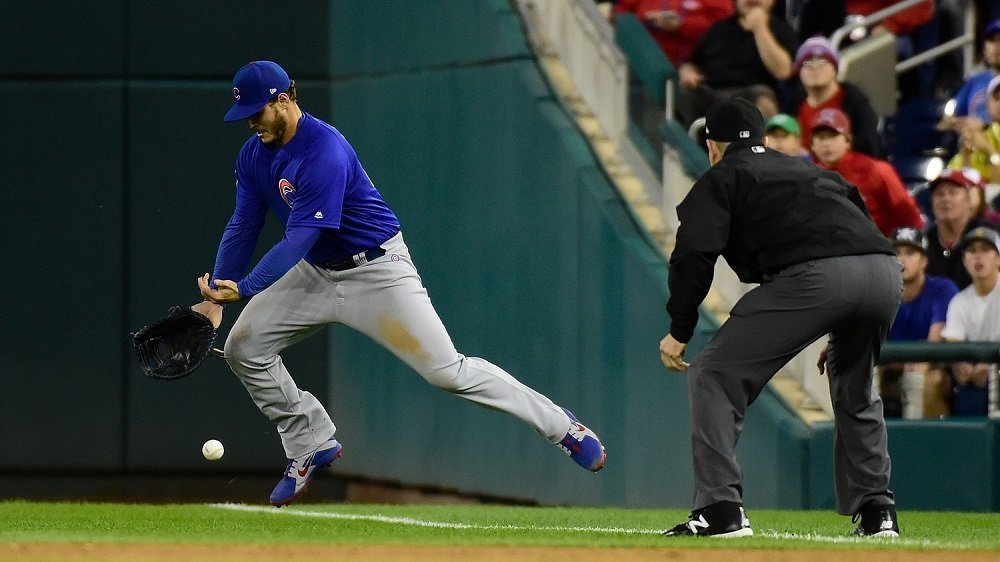 WASHINGTON, D.C. — After what was assuredly a grueling experience for the Chicago Cubs (83-58) on Friday night, with their game versus the Washington Nationals (70-72) postponed less than two innings in following two lengthy rain delays, the North Siders failed to bounce back in the opener of a Saturday doubleheader. Delayed by even more rain, the makeup game on Saturday afternoon began over two hours later than originally scheduled, and the home team dominated from start to finish.

Winning 10-3 at Nationals Park, the Nationals capitalized on a spectacular start by ace Max Scherzer. Pitching a complete-game nine-hitter, Scherzer struck out 11 batters and consistently came up with big stops when the Cubs boasted runners in scoring position. Scherzer, who issued zero walks in the impressive start, improved to 17-6 with the win.

Starting on the hill for the Cubs, recently acquired veteran Jaime Garcia was not given much leeway in his Cubs debut, as he was pulled during the course of the first inning. Recording just one out and giving up three runs on three walks and one hit, Garcia experience an outing to forget and fell to 0-1 with Chicago. Reliever Brandon Kintzler, whom the Nats shipped to the Cubs earlier this season, replaced Garcia on the bump. Kintzler was one of six Chicago hurlers to toe the rubber in the loss.

The Nationals went up 3-0 in the bottom of the first on a pair of RBI singles from Juan Soto and Matt Wieters, respectively. Washington went on to take total control of the ballgame with a five-run sixth inning that featured two Cubs errors. Cubs reliever Randy Rosario walked in a run, which brought reliever James Norwood into the game. Norwood allowed four additional runs to score in the inning, with a dropped popup by first baseman Anthony Rizzo exacerbating the Cubs' problems.

Despite winning by a sizable margin, the Nationals did not exactly stand out in the hitting department. Tallying just six hits, the Nationals benefited mostly from the eight walks that they drew, as well as the three errors and two wild pitches suffered by the Cubs. Scherzer actually came up with one of the six hits accrued by the Nationals, with the stud pitcher garnering an RBI single in the seventh.

Aged reliever Jorge De La Rosa served as one of the few bright spots for the Cubs in the matchup, as he threw three innings of scoreless ball. At the plate, the Cubs were able to tack on a couple of meaningless runs against Scherzer in the top of the ninth, when the workhorse Scherzer was aiming to secure a complete game.

Prior to that, the Cubs made the score 8-1 on an RBI single by Willson Contreras that plated Victor Caratini in the top of the seventh. In the ninth, recent call-up Taylor Davis provided Caratini with his second run scored by skying a sacrifice fly. Thereafter, Addison Russell attained an RBI base knock to score Terrance Gore, which led to the final score of 10-3.