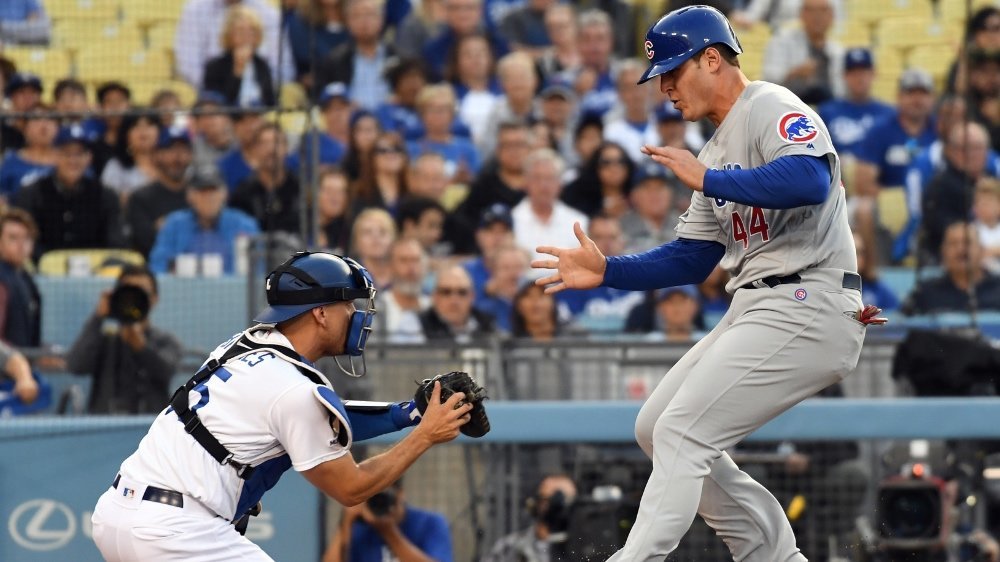 Anthony Rizzo was forced to make a futile attempt at stealing home after getting caught in a rundown. (Credit: Richard Mackson-USA TODAY Sports)

LOS ANGELES — After taking an early 3-0 lead off ace pitcher Clayton Kershaw, things were certainly looking up for the Chicago Cubs (38-30) in their series opener with the Los Angeles Dodgers (46-23) on Thursday night. However, the veteran Dodgers left-hander rebounded once he gave up his second home less than three innings in, and the Cubs were listless at the plate the rest of the way. Chicago blew its 3-run lead at Dodger Stadium and lost to Los Angeles by a final tally of 7-3 in a matchup that featured six combined home runs.

On the very first pitch of the game, Cubs leadoff man Kyle Schwarber went yard for the 15th time this season. Wasting no time in putting his team in front, Schwarber opened the game with 398-foot blast to center. Kershaw proceeded to walk Kris Bryant and give up a double to Anthony Rizzo after that, and the Cubs were able to tack on one more in the top of the first, when Bryant scored from third on a Willson Contreras base knock.

Rizzo committed a baserunning blunder when he got caught in a rundown between third base and home plate to end the inning, thereby spoiling the Cubs' early momentum. Bryant made up for it by hammering the second leadoff blast of the night in the top of the third. Bryant's 14th long ball of the year carried 402 feet beyond right-center and gave the Cubs a 3-0 lead. Surprisingly, the North Siders went cold at the plate following the Bryant bomb and advanced just one runner into scoring position throughout the remainder of the contest.

Kershaw pitched six innings, in which he struck out eight, and ultimately notched the win. His counterpart on the evening was fellow lefty Jon Lester, who experienced a start that progressed in the exact opposite manner as Kershaw's. Dominating early on, Lester pitched three scoreless frames before a lucky infield single for the Dodgers flipped the script in the bottom of the fourth. David Freese smacked a softly hit liner that made direct contact with Lester's cleat as it swung out to the side on the follow-through.

What would have likely been a routine groundout turned into a hit for Freese because the ball caromed off the foot of Lester and slowly dribbled on the infield grass, giving Freese enough time to reach base. Just two pitches later, star Dodgers slugger Cody Bellinger powered out a 2-run homer to left. Lester next gave up a single and was then taken deep again, as Max Muncy swatted a 2-run tater to center on the first pitch thrown to him in his at-bat. In a span of a mere five pitches, the Cubs went from leading by three to trailing by one.

The Dodgers continued to thrive by way of the home-run ball in the ensuing inning, with Freese tagging Lester for yet another 2-run jack. The round-tripper to right made the score 6-3 in favor of the Dodgers, and the Cubs never seriously threatened the Dodgers' lead after that. Lester lasted five innings on the hill and, despite fanning seven, was handed the loss. Bellinger manufactured an insurance run in the seventh with his second homer of the night. A lined shot that sailed into the bleachers down the right-field line led to the end result of 7-3, meaning that all seven of the runs scored by the Dodgers in their win came via home runs. As for the Cubs, the loss dropped them to 1-3 on their current West Coast swing and 2-8 in their last 10 road games.

My life so sweet, I feel like Cody. pic.twitter.com/y7HtFUuODP