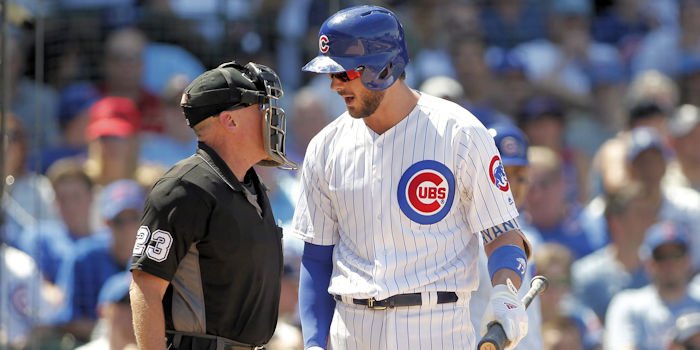 The Crosstown rivalry was wild on Tuesday afternoon as reigning MVP Kris Bryant was ejected and a White Sox announcer was going wild on TV. However, with all that drama, the Cubs were victorious 7-2 as they tied up the series 1-1 with the White Sox. The Cubs have now won nine out of 11 games since the All-Star break.

Catcher Willson Contreras slugged a three-run homer to left field in the first inning to continue his sizzling hitting as of late.

In 17 cleanup starts this season, Contreras has an incredible eight homers. He also has five homers since the All-Star break which is second best in the majors behind only Giancarlo Stanton.

For the month of July, he is batting .338 with seven homers and 17 RBI. Interestingly, he has four homers in his last five hits.

Bryant was ejected for the first time in his career early in the game for arguing balls and strikes after an inside pitch that he took for strike three. Replay and Gamecast showed that it was a ball and that Bryant was correct to complain about the call. In case you were wondering, Bryant was also ejected one time in the minor leagues.

The Cubs were upset with the umpire's strike zone through four innings as they struck out a ridiculous 11 times in 12 total at-bats. According to Elias, Carlos Rodon's is the first pitcher in major league history to strike out 11 or more batters in only four innings or less.

Javy Baez moved to third base in Bryant's spot to replace him at the hot corner. However, Baez earned an infamous golden sombrero for striking out five times in five at-bats. The last Cubs positional player to achieve this poor performance was Geovany Soto in 2008.

Lackey ended up going five wild innings giving up five hits, two runs, two walks, five strikeouts, and four hits batters in the win. His only runs that he gave up was a Carlos Rondon two-run double in the second inning. It was the pitchers' first major league hit.

Deep and out. #Crushed pic.twitter.com/31e1A0wKWY

The craziest part of the game was John Lackey's inability to throw strikes as he hit four batters during the contest. The White Sox announcer Hawk Harrelson went berserk on television calling out Lackey and telling him that Lackey would "get his" and that the White Sox should immediately retaliate.

Check out the full video below of Hawk's craziness.

Cubs announcer Len Kasper said the following witty remark after all batters getting hit during the game.

“We’re under a bench clearing watch now a warning until about 4:30 this afternoon," Kasper said during the broadcast.

In the sixth inning, the Cubs put the game away with a RBI single by Contreras to score Ben Zobrist and a sacrifice fly by Albert Almora Jr. that scored Anthony Rizzo. The Cubs added an insurance run in the eighth inning with an Almora RBI double to put the Cubs up 7-2.

The crosstown rivalry will continue on Wednesday as the two teams will travel across town to Guarantee Field for a 7 pm CDT start which will be televised on ESPN.