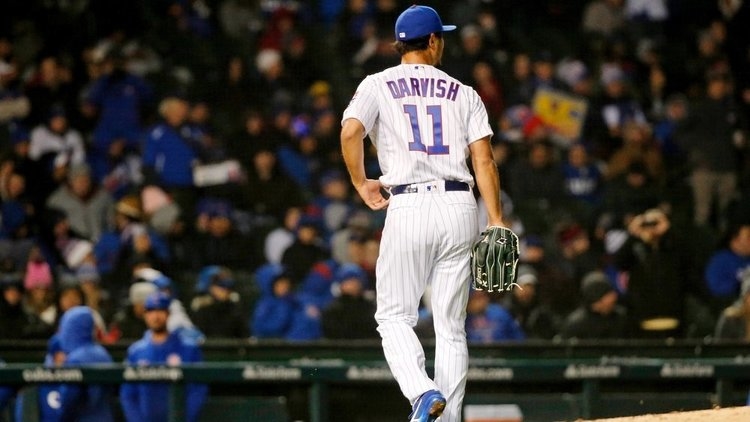 CHICAGO, Ill. — Making his third start of the season, struggling Chicago Cubs (3-8) pitcher Yu Darvish was unable to get off the snide at Wrigley Field on Wednesday. The right-hander was charged with all five of the runs scored by the opposing Pittsburgh Pirates (6-4) in 5 1/3 innings of work. The North Siders lost 5-2, going just 1-for-8 with runners in scoring position.

The Buccos tagged Darvish for a pair of home runs early on. Catcher Francisco Cervelli, who has hit more home runs against the Cubs than any other team, put Pittsburgh ahead 1-0 with a solo shot in the top of the first. In the third, center fielder Starling Marte drilled a 2-run shot to make it 3-0. Both homers came with two outs. Right fielder Jason Heyward smacked the Cubs' lone dinger of the night with a 400-foot rocket to center in the fifth. Heyward has four homers on the season and is on pace to shatter his tally from last year of eight round-trippers. The veteran outfielder went 3-for-4 at the dish and was the sole Cub to garner multiple hits.

Darvish was chased from the game in the sixth, paving the way for young reliever Kyle Ryan to take the mound. The lefty with an unorthodox delivery gave up an RBI single to Josh Bell and then allowed a run to score via a throwing error on a futile pickoff attempt. Both runs were charged to Darvish. Meanwhile, for the Pirates, hurler Jordan Lyles struck out 10 in six innings of work and gave up just one run.

Cubs shortstop Javier Baez brought in a run with a double in the eighth that put runners on second and third with one out. Pirates reliever Felipe Vazquez was brought in after that and forced two outs that left the runners stranded. Vazquez finished off the Pirates' 5-2 victory in the ninth for his third save. The rubber match of the 3-game set will take place tomorrow at 7:05 p.m. CDT.