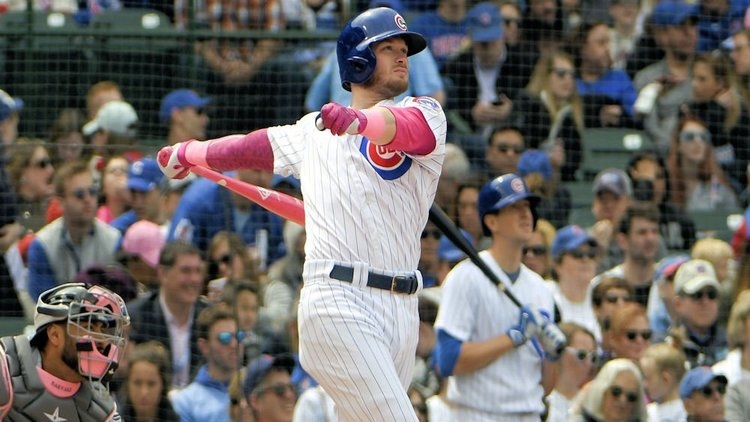 It was a busy night on the diamond that saw the Cubs go 3-2, but more importantly, two key players stood out in AAA. Both Adbert Alzolay and Ian Happ had great nights as they hope this is a step for what is to come the rest of the way.

IOWA CUBS 5 – Omaha Storm Chasers 3: After their rainout on Wednesday night, the Cubs and Storm Chasers were set to play a doubleheader on Thursday, something that has been the norm for Iowa this season. After a rough AAA season debut, Adbert Alzolay was back on the hill looking for better results the second time around. He certainly delivered, going five innings and allowing just 1ER on 3H with 6K to before the bullpen sealed the deal in the 5-3 win.

Robel Garcia got the scoring started for the Cubs right away in the second inning as he went deep for his third homer in 2019 for the 1-0 lead. Omaha tied things up 1-1 in the bottom of the third after an Erick Mejia single, but it was the Cubs bats took control of the game.

Starting in the fourth inning, Phillip Evans and Garcia each collected a pair of singles to put two runners on base. It was then time for Jim Adduci to deliver the knockout punch with his fifth homer of the season and 4-1 Iowa lead. The Cubs added another run in the fifth as Taylor Davis got in on the long ball with his second of the season for the 5-1 Iowa lead.

Jim Adduci's blast would rank as the second-furthest shot in the MLB this season. pic.twitter.com/Z6EAChl6Bg

Junichi Tazawa delivered another scoreless inning in the sixth before Randy Rosario yielded his first two ER of the season in the seventh courtesy of the Elier Hernandez home run to make it a 5-3 game. Dillon Maples finished things up to record the final out for his first save of the season and seal the win.

IOWA CUBS 6 – Omaha Storm Chasers 3: Looking for the doubleheader sweep, the Cubs turned to their ace Collin Rea as looked to continue his comeback season. Rea (5-1) battled through some rough patches in his five innings of work to allow 3ER, but the offense and work of Matt Carasiti in the bullpen was the difference as the Cubs picked up the sweep 6-3.

For the second time on the night, it was the Cubs striking first as they took the lead in the first inning. A one-out Donnie Dewees triple set the stage for Ian Happ who returned from a minor injury. After a rough first game, Happ put the Cubs up 1-0 following his ninth double of the season. Happ would score later that inning on a Dixon Machado RBI groundout putting Iowa up 2-0 after 1.

The Cubs doubled their lead in the fourth as Happ was at it again. Once again, it was Dewees setting the stage taking one for the team to get on base. Happ responded to that by belting his sixth homer of the season for the 4-0 Iowa lead. Happ was not done as his night continued in the fourth with a two-RBI single stretching the lead to 6-0 Iowa.

Omaha finally got on the board in the bottom of the fourth as Hernandez hit his second homer of the day to pull the Storm Chasers within 6-2. Offerman Collado picked up a sixth-inning sacrifice fly to pull within 6-3, but that was all Omaha could get as the Cubs picked up a huge doubleheader sweep.

This was a significant string of wins for the Cubs as they move back to 28-19 on the season. After a rough first game, Happ went 4-4 with 5 RBI’s to bring his average up to .240.

TENNESSEE SMOKIES 9 – Pensacola Blue Wahoos 3: If you have wanted to track the top arms in the Cubs system, Wednesday was the night to do so as both the NO. 1 and NO.2 pitching prospect were on the mound. No. 1 prospect Oscar De La Cruz has been as good as advertised with Tennessee as he looked to keep it rolling. Although rouged up a bit more in this start, allowing 3ER in 5 innings, De La Cruz was packed by a five-run inning to help him improve to 2-1 with Tennessee after the Smokies picked up the 9-3 win.

Jared Young put the Smokies on top with an RBI single in the first, but the Blue Wahoos managed to tie things up in the second off an Ernie De La Trinidad single. It was the Smokies retaking the lead in the bottom of the second as Connor Myers and Vimael Machin each picked up RBI singles to push the lead to 3-1. The Smokies never looked back as they used a big fourth inning to bust the game open.

It was all about a balanced attack in the fourth as it seemed like everyone in the lineup did something right. Add in RBI singles from Machin and Young, and you had a 6-1 game with the Smokies still threatening. Ian Rice added another single to push the lead to 7-1 before the Christian Donahue single capped off the scoring with Tennessee up 8-1.

Pensacola did their best to climb back in the game during the top half of the fifth as they managed to make some hard contact off of De La Cruz. They were rewarded with RBI singles from Mitchell Kranson and Ben Rortvedt to cut the lead to 8-3. Machin added another RBI single in the bottom of the fifth for the final run of the game as the Smokies roll 9-3.

Tennessee moved to 23-22 to get back over.500 for the first time in two weeks. Machin was on fire at the dish going 4-5 with 3 RBIs on the night. He is now hitting .360 for the year. Young also added 3 RBI’s to go with two hits, while Roberto Caro took 4BB in the win. Michael Rucker and Ian Clarkin tossed four innings of scoreless relief.

MYRTLE BEACH PELICANS 2 – Frederick Keys 8: The season-long struggle continued for Alex Lange as he fell to (1-7) following an 8-2 loss to the Keys on Wednesday. Lange did, however, deserve much better luck as he went 5 2/3 innings allowing just 3 ER with none of those coming until the sixth inning. This was by far his best performance of the season, which is a positive step going forward.

Pitching was undoubtedly the case early on as both teams were held scoreless through five. It was in the fifth when the Pelicans broke through first as their patience at the plate paid off. In a span of five pitches, Myrtle Beach loaded the bases on singles from Kevonte Mitchell, Wladimir Galindo, and Grant Fennell putting the offense in business. Following consecutive strikeouts, Miguel Amaya was able to work a walk to plate the games first run, but the Pelicans could not push anymore across wasting a golden chance to bust the game open.

An @mamaya_9 bases-loaded walk in the 5th gives the Pelicans a 1-0 lead!! pic.twitter.com/myEZ31P3Le

Still leading 1-0 in the bottom of the sixth, the wheels began to fall off as Lange seemed to lose his stuff at the wrong time. With the bases loaded, Trevor Craport changed the game with one swing as his double cleared the bases to give the Keys a 3-1 lead. A Jean Carillo single and Sean Miller double capped off a huge inning that saw Frederick seize command 5-1.

The Keys continued to hit the Pelicans bullpen hard in the seventh as they put more ground between themselves. Jake Ring pushed the lead to 6-1 following his single. Craport added to his big game with another double as the Keys were in full control now 8-1. Myrtle Beach added a ninth-inning run off a Fennell double, but it was nowhere near enough for the win as the Pelicans fall 8-2.

Fennell paced the offense with two hits to go with his one RBI in the loss. Tyler Payne, Mitchell, and Galindo picked up the remaining four hits for the Pelicans. Manuel Rodriguez worked a scoreless 1 1/3 innings out of the pen with 3Ks.

SOUTH BEND CUBS 1 – Fort Wayne Tin Caps 3: For the third time in as many days, the Cubs offense was stifled by the Tin Caps scoring one run yet again and falling 3-1. Peyton Remy was one of the bright spots in this loss as he dazzled on the mound. In five innings, Remy allowed 1BB and 3H while striking out five batters to lower his ERA to 2.42. He also did not allow a run as he kept his team in the game throughout.

Fort Wayne put an end to the 0-0 pitchers dual in the sixth as they got to Zach Mort. Justin Lopez delivered the big blow of the game with a two-run shot for his fourth of the season and second of the series. That not only gave the Tin Caps a 2-0 lead but proved to be the game-winning hit in the process as the Cubs have had no answers to their pitching.

South Bend managed to pull within one in the top of the seventh as their offense finally broke through. With one out, Nelson Velazquez singled to put himself on base before using his legs to steal second for his fifth steal of the year. That steal proved to be vital as Tyler Durna followed that up with a line drive single to center to make it a 2-1 game. Christopher Moral was then the victim of tough luck lining into a double play to put an end to an even bigger rally. Lee Solomon sealed the deal with an RBI single in the bottom of the seventh to give the Tin Caps the 3-1 win.

Durna and Andy Weber paced the offense as each of them picked up two hits in the game. Jonathan Sierra, Velazquez and D.J. Artis all had one hit in the game as Cubs tallied seven total hits in the loss. South Bend is 24-20.

Peyton Remy goes five scoreless, but the TinCaps beat the Cubs 3-1 in game 3. We'll wrap up the series tomorrow night at 7:05. pic.twitter.com/IwouVaztK7