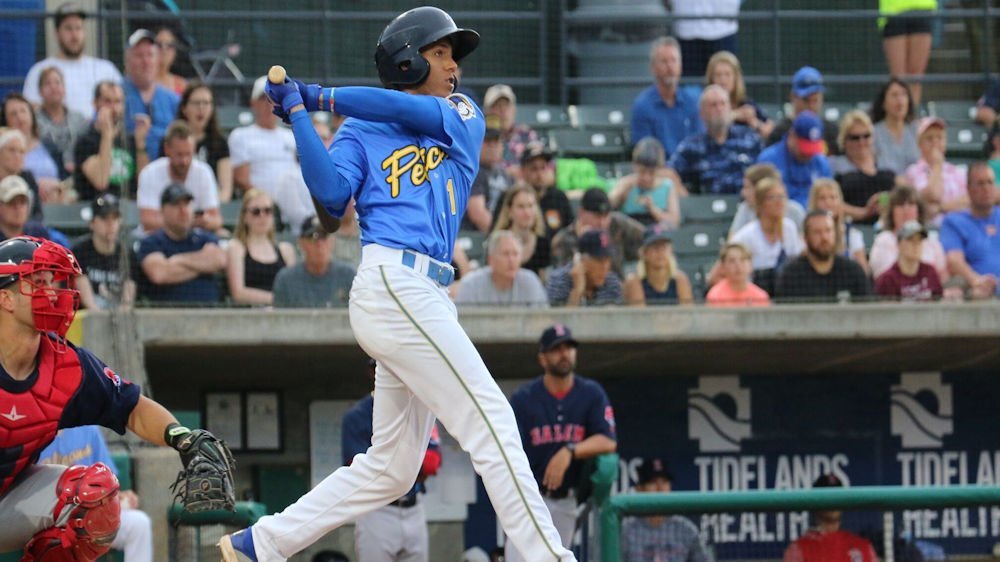 Ademan is one of the top prospects on the Pelicans (Photo credit: Larry Kave)

It was a light day on the farm for the Cubs Monday night as only two teams were in action on the diamond. Neither one of those had much to celebrate at the end of the day as the Cubs went 0-2 on the night.

TENNESSEE SMOKIES 2 – Montgomery Biscuits 3: With Tyson Miller on the mound, the Smokies looked to win their second in a row against division leader Montgomery on Monday. Miller, put on quite a show, tossing a season-high seven innings to go with a career-high 11 strikeouts allowing 3ER on 6H. Despite that great effort, Miller (3-3) suffered his third defeat of the season as the Smokies offense couldn’t rally around him falling 3-2. Miller is sporting a 2.26 ERA as he remains in the top five in the Southern League.

After a scoreless first inning, both teams got on the board in the second as it was Tennessee striking first. Jhonny Pereda led things off with a base on balls and then advanced to second with his first stolen base of the season. With a wild pitch moving him to third, Pereda was in danger of being stranded as the Smokies had two outs in the inning. Thankfully Eddy Martinez did not allow that to happen as he lofted a soft single to right to give the Smokies a 1-0 lead. That lead was short lived as the Biscuits came out swinging in the bottom half of the second.

Montgomery got to Miller in the second inning as he couldn’t seem to put the hitters away like he was accustomed to. Miller would set down the first two hitters before a two-out rally gave the Biscuits the lead. Doubles was the name of the game for Montgomery as a string of three straight doubles gave the Biscuits a 2-1 lead. Robbie Tenerowicz and Kevin Padlo tallied the RBI doubles to provide the biscuits with the lead. One pitch later it was Josh Lowe delivering the game-winning RBI with a single to push the lead to 3-1 after two as Miller would not allow another run after that.

With the game still sitting at 3-1 and in the final three innings, the Smokies needed to find some offense if they expected a win. Look no further than the seventh inning when they pushed across their second run. With one out, Ian Rice made it a 3-2 ball game as he went deep for his first of the season. Charcer Burks followed that up with a triple, as a fly ball would tie things up at 3-3. Unfortunately for the Smokies, a pair of fielder’s choices napped Burks at the plate, as Martinez would be gunned down at home later in the inning on a Clayton Daniel single keeping things 3-2.

Down to their last outs, the Smokies staged one final rally as they looked to deliver in the ninth. With two outs, Burks kept the inning going as he singled to center. That was followed by a pair of walks from Martinez and Christian Donahue, and suddenly the bases were loaded. With the go-ahead run on second, Daniel hit one right on the screws toward center field, but it was right at the fielder for the final out as the Smokies dropped a tight one 3-2.

Tennessee continues to sit in fourth place as they are 28-28 on the season. The bottom of the order did the damage for Tennessee today as they collected all five hits with Burks grabbing two of them. Rice, Martinez, and Daniel added the other three. Roberto Caro and Vimael Machin were a combined 0-7 on the night for a rare quiet night from the two of them.

MYRTLE BEACH PELICANS 5 – Wilmington Blue Rocks 9: The Pelicans continued their series with the first place Blue Rocks on Monday as they looked to even the score. Despite holding an early lead and playing to a tie through five innings, it was the five-run sixth that lifted Wilmington in this one as they pulled away for the 9-5 win.

Making his first start of the season was Erick Leal as he was looking for a strong outing. Leal, will have to wait five more days for that chance, as he lasted just four innings in a no-decision effort allowing 4ER on 7H in the process.

The Pelicans did manage to back their started with some early run support as they opened the scoring in the third inning. A leadoff walk from Jimmy Herron opened the inning before D.J. Wilson added a one-out single to put two runners on base. Zach Davis, who has thrived since moving to the leadoff role brought both those runners’ home with one swing as his third double of the season gave the Pelicans a 2-0 lead through three.

That score would hold up until the fifth inning when one swing would change the outlook of this game. The Blue Rocks had something going off of Leal in the fifth as a pair of singles from Rudy Martin, and Blake Perkins led things off while a hit by a pitch to Brewer Hicklen loaded the bases with no outs. That is when MJ Melendez chased Leal from the ball game with one swing as he went deep (4) for a grand slam putting Wilmington on top 4-2.

Now down by a pair, the Pelicans refused to go down quietly as they two rallied in the fifth inning. It was Davis reaching base yet again getting hit by the pitch. Davis would then use his wheels to record his 20th steal of the season setting the stage for Carlos Sepulveda who doubled him home to make it 4-3. With two outs, it was Cam Balego coming through as his single made it a brand-new ball game-tying things up 4-4 through five.

The sixth inning is where the Blue Rocks pulled away as the Pelicans were hoping Jesus Camargo would be able to continue his strong efforts out of the pen. After pitching a scoreless fifth, Camargo was unable to make it out of the sixth as Wilmington hit him hard and often. Singles from Hicklen and Dennicher Carrasco made it a 6-4 lead before an RBI fielders’ choice from Pratto pushed the lead to 7-4.

The Pelicans were unable to do much more offensively the rest of the night but did manage to push across a run in the eight. With runners on the corners after an Aramis Ademan single and Luke Reynolds walk, Wilson made things a 9-5 game with a sacrifice fly. A fielding error allowed Davis to reach and put two runners on, but the Pelicans couldn’t push any more runs across the rest of the game falling 9-5.

Myrtle Beach is 20-38 as they hope the upcoming all-star break gives them a chance to reset their focus for the second half. Davis continues to do his job at the top of the lineup, collecting a pair of hits and reaching base three times. Ademan also tallied two of teams eight hits in the loss with Sepulveda, Balego, Herron, and Wilson adding the other four. Ryan Lawlor and Ben Hecht tossed a combined 3 1/3 inning of scoreless relief from the pen. Lawlor has a 0.96 ERA this season.

Trust us when we say, you're going to want one of these! ??

Get your @DavidBote13 bobblehead tomorrow night at @FourWindsField. The first 1,000 ticketed fans through the gates will get one of the walk-off man himself.