On November 3rd, 2016 the Chicago Cubs finally did the unthinkable, snapping a 108-year curse and winning the World Series in a history-making, seven-game series against the Cleveland Indians. It was a moment that most long-time Cubs fans never thought would happen. Of the many storylines to Chicago's fairytale season, one stood out: the late-career renaissance of David Ross, the 39-year-old catcher who had played back-up for 13 of his 15 pro seasons. In TEAMMATE: My Journey in Baseball and a World Series for the Ages (on sale May 9, 2017; Hachette Books, $28.00; ISBN: 9780316559447) star player David Ross gives readers an exciting look at his storied career in Major League baseball.

Beyond Ross's remarkably strong play, he became the ultimate positive force in the Cubs locker room, mentoring and motivating his fellow players, some of them nearly twenty years his junior. Thanks to Cubs Kris Bryant and Anthony Rizzo, "Grandpa Rossy" became a social media sensation. No one, however, could have predicted that Ross's home run in his final career at bat would help seal the Cubs championship. Now, in TEAMMATE, Ross shares the inspiring story of his life in baseball, framed by the events of that unforgettable November night. In Teammate, Ross will discuss:

Behind the Scenes of the World Series and Game Seven 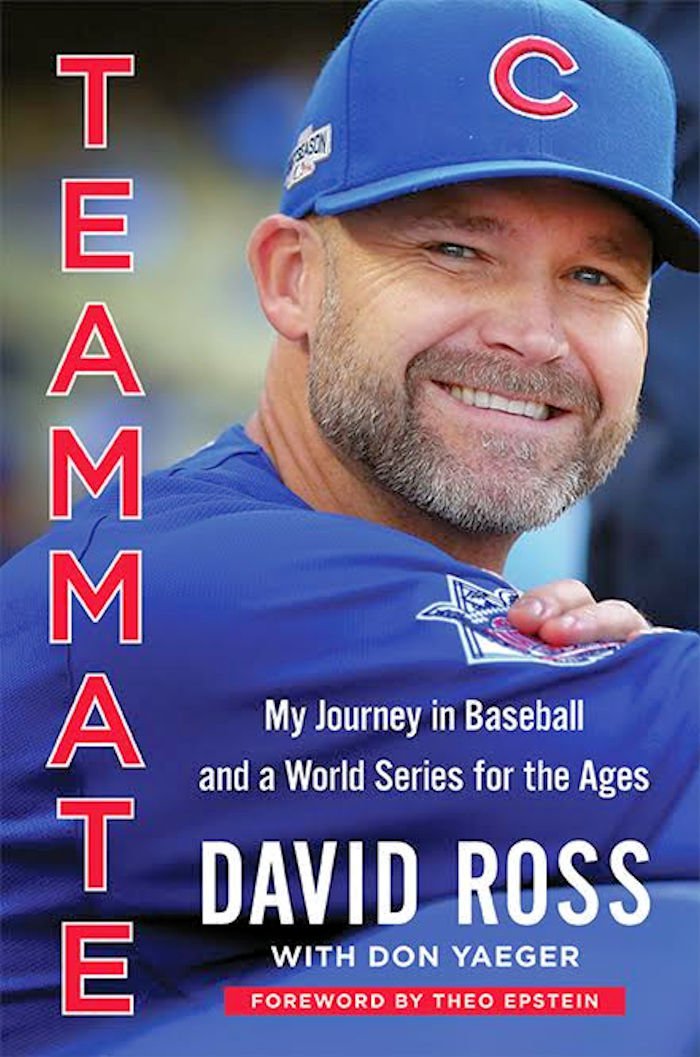 -- Ross reveals what he was thinking when his fielding errors allowed two Cleveland runs to score in the 5th inning.

--Ross takes readers inside the players-only meeting called by Jason Heyward during the 17 minute rain delay – and how the team cheered up Aroldis Chapman.

Hitting Rock Bottom and Redemption: How Ross thought his career was over after being cut from the Reds in 2008, and how a conversation with Theo Epstein (his future boss in Chicago) changed his life.

Concussions and the MLB: Ross describes his scary experiences with concussions in his career, including a nearly season-ending experience in Boston.

The Origin of the “Cock Bump”: Inspired by Dusty Baker’s 1970s invention of the high-five, David discusses how he invented his signature celebratory move, the “Cock Bump,” and how Jason Heyward helped resurrect it when the two players reunited on the Cubs.

Jason Heyward’s generosity: Ross reveals how Heyward’s extraordinary gift – paying for a hotel suite for David and his family on every trips – allowed Ross to spend more time with his family.

Written in collaboration with New York Times-bestselling sports journalist Don Yaeger, TEAMMATE will provide a thrilling personal account of his Ross’s career in baseball, framed by the events of that unforgettable game seven night. Ross will also detail the childhood influences that cemented his humble outlook, the triumphs and disappointments of playing for seven different MLB teams, and what it was like to suddenly find himself as an unlikely Cubs icon—both on the field and as a mentor on the bench. TEAMMATE will give loyal Cubs fans and baseball lovers everywhere a compelling, feel-good story about the legendary team that broke the Cubs’ curse.

David Ross is a retired Major League Baseball catcher, who won the World Series with the Boston Red Sox in 2013 and the Chicago Cubs in 2016. In his fifteen-year career, he played for the Los Angeles Dodgers, Pittsburgh Pirates, San Diego Padres, Cincinnati Reds, Boston Red Sox, Atlanta Braves, and Chicago Cubs.