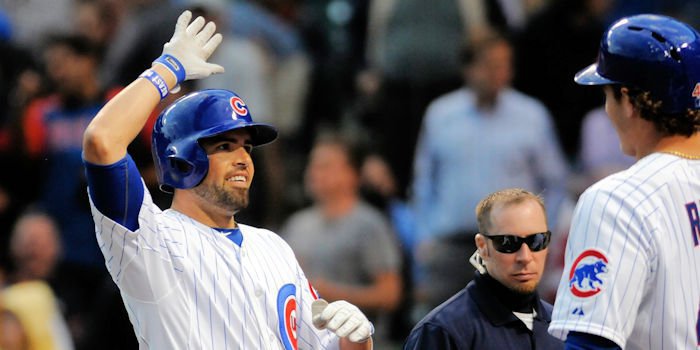 Chicago, IL (March 22, 2017) – CSN Chicago (CSN), the television home for the most games and the most comprehensive coverage of the defending World Series Champion Chicago Cubs, has announced former Cubs/MLB standout and fan favorite David DeJesus has been named the new Cubs studio analyst for CSN's Cubs Pregame Live presented by Fields Auto Group and Cubs Postgame Live presented by BlueCross BlueShield of Illinois beginning with the 2017 MLB regular season. DeJesus will be paired with veteran CSN Cubs Pre/Postgame Live host David Kaplan to provide expert analysis for CSN's slate of 81 scheduled Cubs games beginning in April. In addition to his Cubs studio analyst duties, DeJesus will also make regular appearances on CSN's weeknight sports discussion program, SportsTalk Live presented by The Chevy Silverado, along with select appearances on the early edition of In the Loop presented by Comcast Business and on CSNChicago.com’s "Cubs Talk" podcasts. The announcement was made by Kevin Cross, Senior Director of News & Original Content for CSN Chicago.

"I'm thankful to CSN for giving me this opportunity to once again be a part of the best organization in baseball," said DeJesus. "I loved my time with the Cubs and I am excited to be able to bring my insight to the viewers and enjoy the ride to another championship."

"During his time spent in Chicago, David quickly became a fan favorite for his dedication and hard-working approach not only on the field, but also in the community," added Cross. "David’s contagious enthusiasm and deep knowledge of the game will definitely be major assets to our Cubs studio shows beginning this season and we can’t wait to get David & 'Kap' together to bring Cubs fans the expert coverage and analysis they have come to expect from our network."

DeJesus (@David_DeJesus3), a standout defensive outfielder who played 13 seasons in the Major Leagues, including two for the Cubs in 2012 & 2013, made his Major League debut in September of 2003 with the Kansas City Royals. In his first full season with the Royals in 2004, DeJesus finished sixth in American League “Rookie of the Year” voting when he hit .287 with seven home runs and 39 RBI in just 96 games. DeJesus enjoyed his finest offensive season during the 2008 campaign with the Royals hitting .307 with 12 homers, 73 RBI and 11 steals. In his 13-year MLB career, which included stints with the Royals, Athletics, Cubs, Nationals, Rays, and Angels, DeJesus compiled a .275 career batting average with 99 home runs and 573 RBI.

I am officially retiring from playing baseball. Im so excited for this next chapter with @CSNChicago covering the Cubs with @thekapman.

Looking forward to having you back with the team, @David_DeJesus3. pic.twitter.com/GGfklq9Xzk

Finally I can share...after playing baseball for 13 years in the Major Leagues, Dave announced his retirement today. AND he announced his new job...he is going to be a CSN broadcaster for the CHICAGO CUBS !! Home sweet home!! I want to scream it from the rooftops how proud I am of this man! Very few make it to 13 years in the big leagues. Dave was one of the best outfielders I ever saw play. He was a reliable, solid player and was SO fun to watch. while he had an incredible career, what I most admired is HOW he played the game. Everyone who knows Dave always gushes about how NICE he is and how he's such a stand up guy. His light shines SO Bright! I always say this but There is nothing bad anyone could say about this magical man. Baseball can be grueling, 162 games in 180 days, plus spring training. While it's a dream job in many ways it's physically not easy on a man, and it's not easy on a family year after year. But through it all Dave was always smiling, always laughing, never complaining. Ive never met a more positive person on this earth. I often joke w him that he's a Disney cartoon character bc of how much he smiles. Sometimes I would be thinking "Um you just had a bad game, why you so happy?" ?? he was an amazing team mate. always putting others before him. I loved how He would get so excited when his friends had good games and was never jealous of anyone. He genuinely wanted what was best for his team. he worked his ass off! One of the First to get to the field, and last to leave. He trained like a beast, never once did any illegal enhancements and He taught me what hard work looks like. while he played at the highest, most demanding level, He NEVER stopped being THE BEST dad. the best I could ever dream up for my son. Id be lying if I said the distance did not take its toll on us, but hes never stopped showing me kindness and he's never stopped being my best friend. never will. I don't care what anyone says, Same team always. I love you baba and I am so stinking proud of you! Your gonna kill it on TV!As much as I will miss watching those dimples light up around the bases, I Can't wait to watch that face on TV talking about my beloved CUBBIES!!