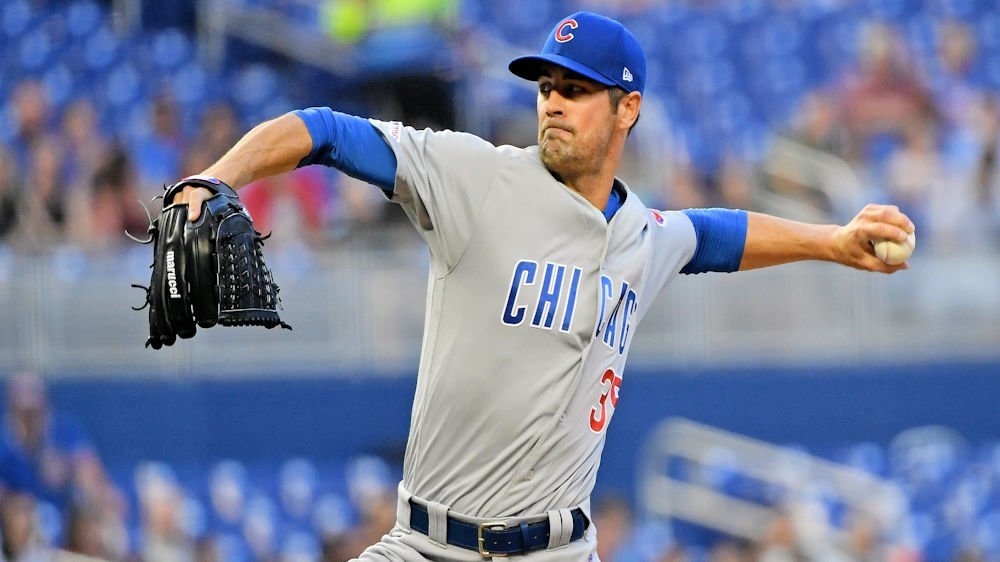 ST. LOUIS, Mo. — A pitching duel between two crafty veteran starters served as the focal point for Sunday's series finale between the Chicago Cubs (31-26) and the St. Louis Cardinals (30-28). Led by workhorse hurler Adam Wainwright, the Cardinals kept the Cubs scoreless through eight innings before staving off a ninth-inning comeback attempt by the North Siders. Winning 2-1 at Busch Stadium, the Redbirds collected a 3-game sweep of their archrivals.

Despite drawing eight walks on the afternoon, the Cubs mustered just one run, as they left seven men stranded on base, went 0-for-4 with runners in scoring position and hit into three double plays. At the ripe age of 37, Wainwright threw 126 pitches in an incredible 8-inning performance that saw him strike out eight and give up only two hits. While Wainwright's scoreless outing was quite impressive, 35-year-old Cubs starter Cole Hamels was also fantastic in his seven innings of work. Hamels was taken for one unearned run and allowed a mere two hits and two walks.

Unfortunately for Hamels, a throwing error committed by his battery mate contributed to him earning the losing decision. In the bottom of the fifth, Cardinals third baseman Jedd Gyorko stole second and was able to reach third because of a terrible throw made by Cubs catcher Willson Contreras in an effort to curtail the steal attempt. Contreras' throw sailed into center field, allowing Gyorko to take third. Soon afterward, Cardinals second baseman Kolten Wong hit a sacrifice fly to center that plated Gyorko and broke the scoreless tie.

Nothing Wong with a sacrifice fly to take the lead! pic.twitter.com/RX45XhXRmG

Later in the contest, Wong made the Cubs pay by making a critical defensive play. With two outs in the top of the eighth, Wong robbed Cubs first baseman Anthony Rizzo of a potential game-tying base knock when he raced out to shallow right field and pulled off a spectacular snow-cone catch of Rizzo's liner to end the inning and leave two Cubs stranded. Wainwright was fired up after Wong secured the incredible snag, which put a bow on Wainwright's stellar outing.

Star Cardinals slugger Matt Carpenter tabbed the walk-off hit in the opening game of the series, and he tallied what proved to be the game-saving hit in the final contest of the 3-game set. When pinch hitting for Wainwright in the bottom of the eighth, Carpenter came through in the clutch with a 2-out RBI single to center that scored Wong and put the Cardinals ahead 2-0. Wong set up the scoring opportunity by stealing second prior to Carpenter's base hit. The Cubs challenged the play, thinking that Wong had been tagged out, but the call stood, as Wong used a smooth feet-first slide to avoid the swipe and reach the bag safely.

With fireballer Jordan Hicks on the bump for the Cardinals in the bottom of the ninth, the Cubs manufactured a valiant comeback effort. Hicks was pulled with one out and runners on the corners, and his replacement, John Gant, was able to finish Chicago off. Cubs second baseman Addison Russell drove in a run on a fielder's choice groundout to shortstop. The dribbler enabled Contreras to cross the plate but resulted in right fielder Jason Heyward getting outed on a force play at second base. Third baseman David Bote then stepped up to the plate as the Cubs' last hope, but he grounded out to end the game. The Cardinals notched a modest four hits and two walks in the matchup but were able to pull out a 2-1 victory that capped off the first sweep suffered by the Cubs in two months.