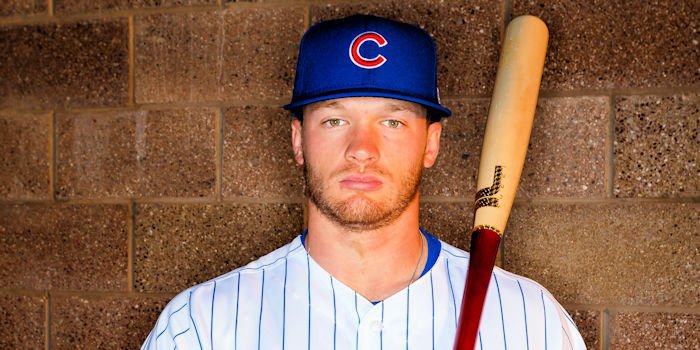 Cubs starlet Ian Happ made a mark with a two-run homer in his Chicago debut, but it was not enough for the North Siders to get the win. Credit: Mark J. Rebilas-USA TODAY Sports

ST. LOUIS -- On the day that star prospect Ian Happ made his major league debut for the Chicago Cubs, the special occasion was marred for the Cubs due to the dominance of St. Louis Cardinals starting pitcher Carlos Martinez. While the star of the first game of this three-game series between the Cubs and the Cardinals was up-and-coming Chicago pitcher Eddie Butler, the second game belonged to Martinez (3-3), who pitched 6.2 innings of five-hit ball and earned the win for his solid pitching display in a 5-3 Cardinals triumph over the Cubs.

Not only was Martinez dominant on the mound, but his offensive performance was solid, too. Earning two of the Cards' eight hits, Martinez drove in St. Louis's first run of the game on a well-placed RBI bunt single in the third. Interestingly enough, the Cubs scored their first run on a hit by a pitcher, as well. Jon Lester received the nod on the hill today, and he was more effective with the bat than the ball. Lester collected arguably the most impressive hit of his career on a double to deep center that scored Cubs second baseman Javier Baez in the top of the second.

Leading 1-0 at that point, the Cubs saw that advantage disappear by way of a fluky one-run third for the Cardinals. St. Louis left fielder Tommy Pham led off the bottom half of the inning with a walk, and he proceeded to steal second base and take third base on a throwing error by Cubs backstop Willson Contreras. Contreras has struggled with errant throws from behind the plate off and on this season and already has a woeful seven errors on the season.

With one out, Martinez laid down the aforementioned sacrifice and was even able to advance to second following an unsuccessful attempt by the Cubs at throwing Pham out at home. Following an ensuing walk and strikeout, the Cardinals caught another break due to ineffective defensive play by the Cubs when Chicago left fielder Kyle Schwarber dropped a fly ball in foul territory for the Cubs' second error of the inning. Nothing came of it, however, as the inning ended at 1-1.

The Cardinals were able to take the lead for the first time in the next inning, though, with third baseman Jedd Gyorko leading off with his seventh home run of the season on a shot to left. Catcher Yadier Molina followed that up with a hit and a steal and was then moved to third on a sacrifice bunt. Pham, who went 2-3 with two RBI, came through in the clutch again in the aftermath of the bunt, scoring Molina with a single to center. Contreras finally experienced some defensive success by catching Pham stealing thereafter, but the damage had been done.

Trailing 3-1 in the fifth, the Cubs had an opportune scoring situation ruined due to overly aggressive play by Happ. With one out, Schwarber was walked, and Happ then reached first on a misplayed grounder, putting runners on the corners. In the next at-bat, first baseman Anthony Rizzo grounded up the middle, and Happ was penalized for violating the Chase Utley Rule on the play. A spikes-high slide by Happ after the force out at second resulted in Rizzo also being called out at first for an inning-ending double play.

Lester (1-2), who gave up a double to Martinez in the bottom of the fifth, was pulled after walking a batter with two outs in the seventh, a decision that proved costly for the North Siders. In 5.2 innings of toeing the rubber, Lester allowed six hits and four runs while striking out nine and walking four, a pitching performance that resulted in a loss to Lester's name. His replacement, Cubs reliever Pedro Strop, immediately struggled, being taken deep on an impressive RBI double to deep center by Pham that made the score 4-1 in favor of the Cardinals. Fellow young St. Louis outfielder Magneuris Sierra followed that up with an RBI hit of his own on a bloop single to right-center.

Happ cut into that 5-1 deficit in the top of the seventh with his first big league hit. Making quite the impression with his first career hit, Happ drilled a 413-foot home run over the wall in right field that pulled the Cubs to within two runs, as Cubs center fielder Albert Almora was at second after doubling earlier in the inning. Right fielder Happ went 1-3 with a walk and the two-run shot in his debut game as a Cub.

If you're Happian you know it, crank a dinger. pic.twitter.com/kE9tUkcJ7Q

The Cubs had one more opportunity to make a comeback in the ninth, as pinch hitter Ben Zobrist accrued a single to right off of Cardinals closer Seung-Hwan Oh (10) with two outs, but Schwarber flied out to the warning track to end the game not long afterward. Overcoming 12 strikeouts, the Cardinals (20-15) defeated the Cubs (18-18) 5-3 at Busch Stadium on Saturday and will be looking to claim the series victory in the rubber match tomorrow afternoon.