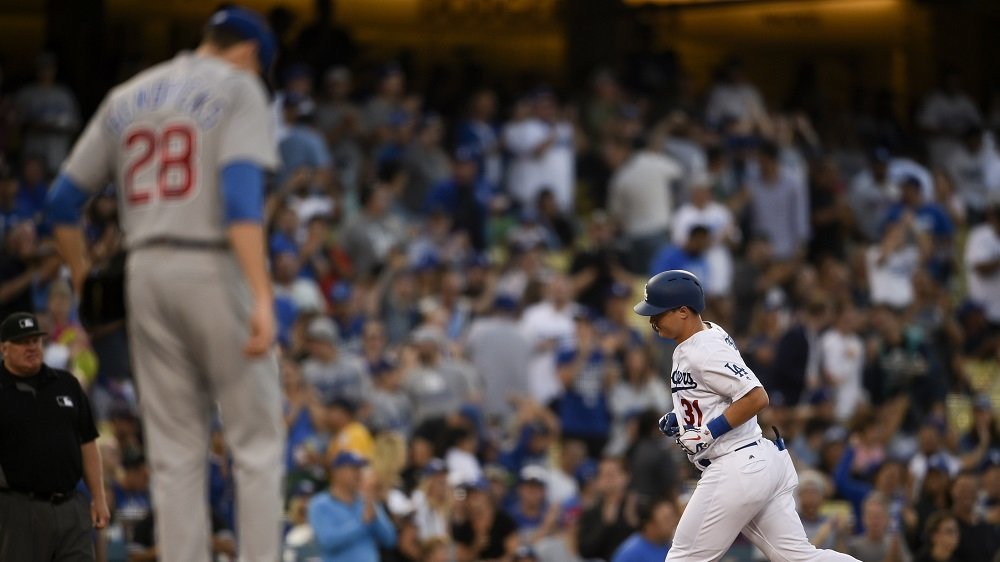 Kyle Hendricks failed to make it out of the third inning in yet another disappointing start. (Photo Credit: Kelvin Kuo-USA TODAY Sports)

LOS ANGELES — In the third game of a four-game series against the Los Angeles Dodgers, the Chicago Cubs' early offensive successes were neutralized by Chicago starting pitcher Kyle Hendricks's early pitching struggles. After taking a 2-0 lead on a first-inning home run, the Cubs gave up six unanswered runs in the opening two frames and never caught up. Giving up 12 hits, including three home runs, to the Dodgers, the North Siders fell 7-5 at Chavez Ravine.

Cubs catcher Willson Contreras provided Chicago with a 2-0 lead when he golfed a pitch from Dodgers starter Alex Wood out of the park for a two-run blast in the top of the first. Lofted 345 feet to left, Contreras's sixth homer of the year came after a clutch two-out double by Javier Baez. Wood recovered after his shaky start and struck out six in seven innings on the bump. He gave up seven hits but walked no one and was credited with the win for his three-run showing to move to 4-5.

Hendricks, on the other hand, picked up his fifth losing decision in his last six starts to drop to 5-8 in what has been a frustrating season for him. Getting charged with six runs in just 2.2 innings, Hendricks was dreadful, allowing eight hits and two walks. Dodgers first baseman Max Muncy scored the first run off Hendricks with a solo shot in the bottom of the first. Later on in the inning, catcher Yasmani Grandal put Los Angeles up 3-2 on a two-out, two-run double.

The Dodgers continued to get to Hendricks in the second inning. Leadoff man Joc Pederson hammered a two-run bomb to right to make it 5-2, and, once again, a two-out hit punctuated the inning for Los Angeles, as Enrique Hernandez drove a single to left that scored a run. Surprisingly, the Cubs were far more efficient at the plate than the Dodgers, who struggled to manufacture runs after Hendricks departed. The Dodgers left 27 runners on base, as opposed to the 10 left stranded by the Cubs, but were still able to win.

The Cubs came through with a two-out hit of their own in the fifth, as Jason Heyward brought home Ian Happ on an infield single. Happ and Heyward were two of four Cubs to garner multiple hits on the evening in Chicago's 10-hit performance. Along with Baez, Heyward came around to score in the eighth on a double to deep center from Contreras, who amassed four RBI in the contest.

Leading 6-5 at that point, the Dodgers did not cave under pressure. Instead, Dodgers center fielder Cody Bellinger hit the third home run of the ballgame for Los Angeles to lead off the bottom half of the eighth. Driving the second pitch thrown to him by Cubs reliever Randy Rosario out to straightaway center, Bellinger put the Dodgers up 7-5. The two-run lead was maintained by Dodgers closer Kenley Jansen, who earned a four-out save after entering with two outs in the eighth. He now boasts 21 saves on the year.

While Wednesday's loss can essentially be blamed on Hendricks and his continued early-inning woes, nonetheless, the Cubs (43-35) were defeated for the sixth time in their last seven games. Of those six losses, the Cubs have given up six or more runs in five of them, fully epitomizing the pitching travails that have plagued the Cubs throughout their recent slump. Chicago will have one more shot at the Dodgers (43-36) in this series, with the lone afternoon matchup of the four-game set coming in Thursday's finale.