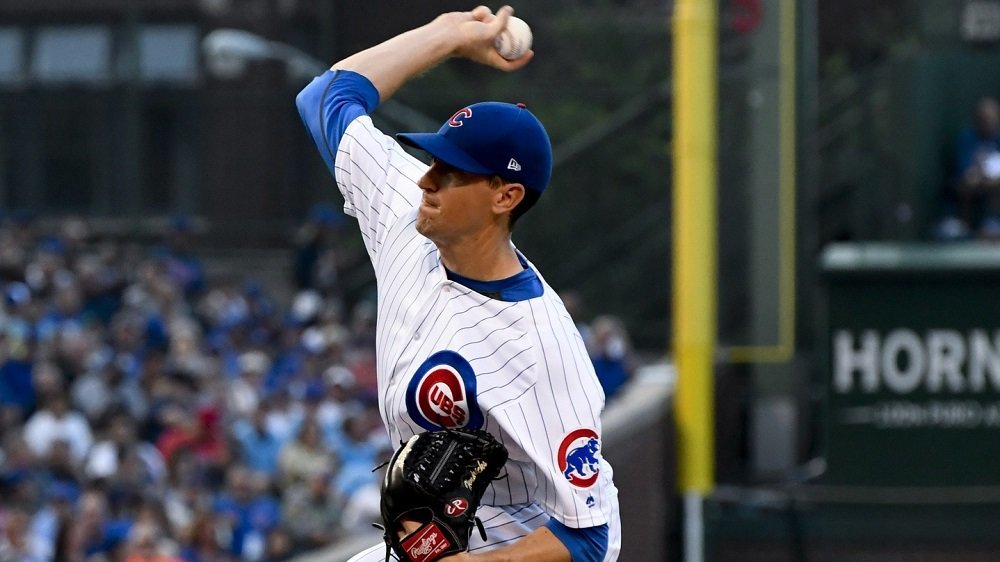 CHICAGO — Mustering just one run for the second night in a row, Chicago Cubs hitting was no match for Arizona Diamondbacks pitching at Wrigley Field on Tuesday night. Falling 5-1, the Cubs struggled at the plate, and Chicago starting pitcher Kyle Hendricks received very little help from his batting compatriots to bolster his cause on the mound.

Hendricks avoided the early-inning woes that have plagued him throughout this season. Unfortunately for Hendricks, the Chicago hitters provided him with no run support during his five innings pitched. Hendricks was handed his first losing decision of July to drop to 6-9 overall. He struck out eight but also gave up three runs on seven hits and two walks.

The Diamondbacks broke a scoreless drought for both teams by tacking on three runs in the fifth. Arizona center fielder Jon Jay, who was a member of the Cubs last year, tallied a leadoff triple to spark the Diamondbacks. First baseman Paul Goldschmidt plated Jay with an ensuing single, and he was later scored himself on a double by right fielder Steven Souza, Jr. Third baseman Jake Lamb capped off the inning with an RBI single through the gap between shortstop and third base, which scored Souza, Jr.

Jay accrued an RBI with a one-out sacrifice fly in the sixth that brought home shortstop Nick Ahmed and provided Arizona with a 4-0 advantage. Cubs right fielder Jason Heyward made a valiant attempt at gunning Ahmed down at the plate, but Ahmed was able to beat out the throw. Heyward got back at the Diamondbacks in the bottom half of the inning, though, by lining a solo homer just over the ivy-covered wall in left field.

And the Cubs are on the board! Homerun by Jason Heyward! #GoCubsGo pic.twitter.com/uuhFmoGDM8

Heyward's homer marked the first blemish on the night for Diamondbacks starting pitcher Clay Buchholz, who made his first start in exactly one month after serving a lengthy disabled-list stint. Buchholz was taken out in the next inning, having pitched 6.2 innings of six-hit ball, in which he struck out five. Buchholz earned a win for his efforts and improved to 3-1 on the season.

The Cubs also had a pitcher make an appearance after a long injury layoff. Coming off the 60-day disabled list, Eddie Butler took the mound for the Cubs for the first time following a series of rehab starts in the minors. Butler tossed two innings and gave up one run and three hits while striking out one batter and walking two others.

Chicago threatened Arizona when it loaded the bases in the seventh, but the Cubs came up empty-handed. With two outs, the Cubs accrued back-to-back singles to chase Buchholz from the game. The pitching change culminated in a walk of Cubs first baseman Anthony Rizzo, which led to another pitching change. The second pitching change paid off for the Diamondbacks, as reliever Archie Bradley struck Chicago center fielder Albert Almora, Jr., out swinging to escape the jam unscathed.

Adding insult to injury, or, rather, injury to insult, Cubs second baseman Javier Baez left the game after getting banged up on a slide by Souza, Jr., who was attempting to stretch a single into a double. Almora, Jr., fielded the hit in center field and threw a dart to Baez, who then tagged Souza, Jr., out. However, Baez was positioned a little too far out in front of the bag, and his knee took the brunt of Souza, Jr.'s, slide.

Later, in the ninth, Souza, Jr., was hit by a pitch and seemed to take umbrage after the fact. While there was no indication that Steve Cishek hit Souza, Jr., intentionally, Souza, Jr., seemed to think otherwise. He became frustrated after taking first base and aired his frustrations at Rizzo, resulting in the two having to be separated.

Cishek stumbled his way through the ninth inning, giving up one run on an infield single hit up the middle by Ketel Marte. That proved to be the final run of the game, with the Diamondbacks winning 5-1. Accruing twice as many hits as the Cubs (58-42), the Diamondbacks (56-46) moved to 2-0 in the four-game set. The Cubs are now 3-4 since the All-Star break.