CHICAGO — Former St. Louis Cardinal Jason Heyward sank his old club on Sunday, as the Chicago Cubs right fielder produced a stellar 3-4 showing that included what proved to be the winning hit in the seventh inning. In a contest that featured 21 total hits and plenty of intense moments in the action, the Cubs topped the Cardinals 4-3 to earn their second consecutive sweep.

In the early goings, a pitching battle between right-hander Lance Lynn of St. Louis and left-hander Jose Quintana of Chicago was the story of the game. However, Heyward, who was a spark plug throughout the game for the Cubs, changed the trajectory of the matchup by leading off the bottom of the third with a single and proceeding to take second base on a wild pitch. Later advancing to third on a Quintana sacrifice bunt, Heyward came in to score on an RBI groundout from second baseman Ben Zobrist, who amassed two RBI on the afternoon.

Lynn lasted just four innings, despite faring well at the start. Giving up five hits and walking four, Lynn was charged for three runs in his outing. The second run of the game came on a leadoff home run by left fielder Kyle Schwarber, his lone hit of the day. Marking his 27th homer of the year, Schwarber's bomb to left put the Cubs up 2-0. Not long afterward, Zobrist collected a two-out single to right that scored shortstop Addison Russell, increasing Chicago's lead to three runs.

Quintana was great, with the exception of one inning, as he gave up two doubles and a game-tying three-run home run in the sixth to end his start after 5.2 innings of eight-strikeout ball. Interestingly enough, Cardinals center fielder Dexter Fowler, a former Cub, came through with the three-run shot. 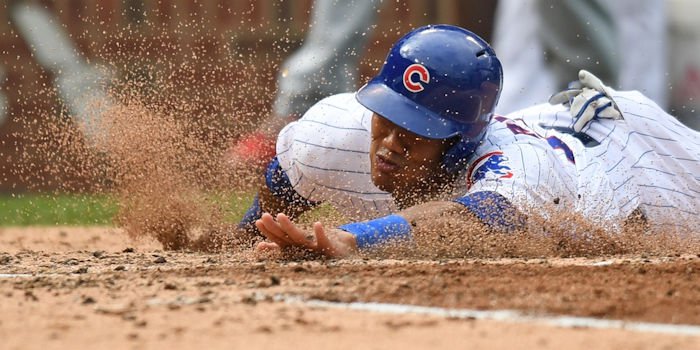 But Heyward had the last laugh in terms of trumping an old club, as the slugger hit a clutch two-out single to left-center in the seventh that scored first baseman Anthony Rizzo and put the Cubs up 4-3, which served as the final score after Cubs closer Wade Davis garnered an easy save in the ninth.

Jason Heyward is hitting .322 (19-for-59) with two outs and RISP this season. pic.twitter.com/x4WraBAirD

Having now won six in a row after losing six of eight, the Cubs (83-66) have a comfortable four-game lead atop the National League Central, with the North Siders' magic number to clinch the division standing at 10 games.