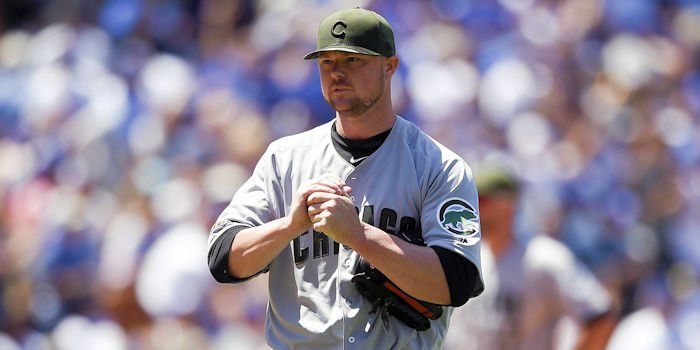 Sunday’s series finale between the Cubs and the Dodgers pit two of Major League Baseball’s best against each and was hyped as pitching duel for the ages with Jon Lester and Clayton Kershaw squaring off against each other.

It quickly turned into a home run derby instead.

The Dodgers defeated the Cubs 9-4, with the combined 13 runs all coming via the long ball. The Cubs fall to 25-24 with the loss and still trail Milwaukee in the N.L. Central. The Dodgers, who are chasing the first-place Colorado Rockies in the West, improve to 31-20.

Lester – who takes the loss falls to three and 3-3 – and Kershaw – who improves to 8-1 with the win – have 248 combined wins and over 3,800 combined innings in the majors, but Sunday's matchup was the first time the two lefties have faced each other.

Los Angeles wins the season series between the two teams. The Cubs two took of three from the Dodgers at Wrigley in early April, but the three-game sweep gives the Dodgers a 4-2 series edge (although these two clubs could see each other in the postseason). The Dodgers' sweep was the first for Chicago at Dodger Stadium since August of 2012.

The Cubs struck for the game’s first run on when Wilson Contreras drilled a 3-2 pitch over the centerfield wall to lead off the second inning. Contreras’ fifth homer of the season gave Chicago a 1-0 lead. However, the Cubs lead didn’t last long. Kike Hernandez walked to lead off the bottom half of the frame, and Austin Barnes hit a soft liner to right field setting up Cody Bellinger’s 10th home run of the season and giving the Dodgers a 3-1 lead.

The third played out similar to the second for the Dodgers as Corey Seager and Yasiel Puig both singled in the frame to put runners on base for Kike Hernandez’ three-run bomb to left center, extending Los Angeles’ lead to 6-1.

Lester – who gave up multiple three-run home runs for just the second time in his career was chased after just 3 1/3 after giving up six runs (all earned) on seven hits and two walks, while only striking out three.

The Cubs rallied in the fourth. Javier Baez hit a one-out home run to left center – his eighth of the season. Kris Bryant walked and Anthony Rizzo launched a 1-0 fastball over the left-centerfield wall to cut the Dodgers’ lead to 6-4.

The Dodgers got a run back on an Austin Barnes’ home run to make it a 7-4 ball game.

Los Angeles added two more runs in seventh on a Puig long ball to left center giving the Dodgers a 9-4 lead and a five-run cushion.

Sunday's game was the third of a six-game trip to California. The Cubs return to action Monday at the Padres. First pitch is set for 3:40 p.m. (CST) and will be televised on ABC 7 and broadcast on 670 The Score.

Right-hander Kyle Hendricks (4-2, 3.25) will face off against RHP Jarred Cosart (0-1, 4.50). Hendricks limited the Giants to just two runs in seven innings last Wednesday. The start was the sixth straight for Hendricks allowing two or fewer earned runs, and he didn't walk a batter for the first time this season.