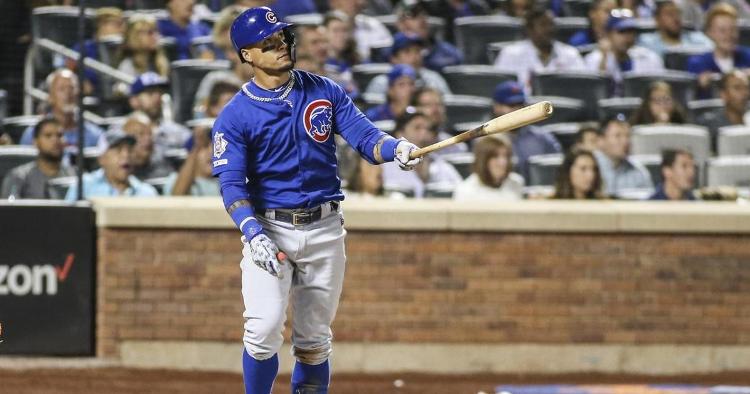 Chicago Cubs shortstop Javier Baez showed out at the dish and in the field throughout the Cubs' 5-2 win. (Credit: Wendell Cruz-USA TODAY Sports)

NEW YORK — In need of a bounce-back victory after suffering their first home sweep of the season over the weekend, the Chicago Cubs (70-61) collected an impressive win to start off their 3-game series at Citi Field on Tuesday night. Defeating the New York Mets (67-64) 5-2, the Cubs were led by shortstop Javier Baez and starting pitcher Yu Darvish, with Baez going 3-for-3 with one walk and Darvish putting together the longest start of his Cubs tenure.

Throwing eight innings of 1-run ball, Darvish struck out seven and gave up just five hits and one walk. Rookie sensation Pete Alonso drove in the lone run scored off Darvish with a solo home run on the first pitch of the bottom of the fourth. The dinger marked Alonso's 42nd homer of the year, which is a new single-season Mets record. Other than that, the Mets did not experience much success against Darvish, who constantly performed well under pressure. Even after allowing a leadoff triple in the bottom of the second, Darvish drew three straight outs and left the baserunner stranded.

Where no Met has ever gone before... pic.twitter.com/2YtUHdNscd

As for Baez, the hotshot middle infielder tallied three RBI on the evening, two of which came on an opposite-field home run. Baez's first plate appearance was rather deflating, as he was thrown out while attempting to stretch a second-inning double into a triple. Baez did not let that faze him, though, as he experienced his most successful offensive performance in quite some time and also pulled off several impressive defensive plays.

Back in my day, a line drive up the middle was a base hit. pic.twitter.com/7KDftcFt4q

Alonso's aforementioned bomb put the Mets up 1-0, but Cubs second baseman Addison Russell quickly answered by going yard in the next inning. Following up a leadoff double from Cubs catcher Victor Caratini with a bomb, Russell smoked a go-ahead 2-run shot out to center field off Mets starting pitcher Marcus Stroman. Similarly, a leadoff double by Cubs third baseman Victor Caratini paved the way for a 2-run blast by Baez in the top of the sixth. Baez hammered a drive to deep right field that bounced off the padding at the top of the wall before going out, thus putting the Cubs up 4-1.

Later in the game, Baez tacked on an insurance run with an RBI double to left field. Plating Cubs right fielder Nicholas Castellanos, who began the top of the eighth with a double of his own, Baez increased the Cubs' lead to four runs. Cubs reliever Brandon Kintzler replaced Darvish prior to the bottom of the ninth and finished out the game for the Cubs. The Mets' J.D. Davis hit a meaningless 2-out solo tater off Kintzler in the final frame, but the Cubs' 5-2 win was secured soon afterward.