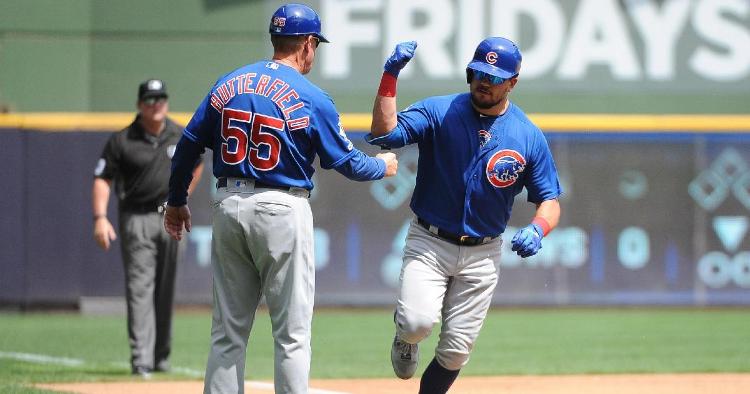 Cubs left fielder Kyle Schwarber thrived near the bottom of the batting order on Sunday, as he smacked a pair of home runs. (Credit: Michael McLoone-USA TODAY Sports)

MILWAUKEE — In their 3-game set versus the Milwaukee Brewers (56-51), the Chicago Cubs (56-49) lived and died by the home-run ball. Fortunately for the North Siders, they hit enough home runs in the series finale to win comfortably. The Cubs scored 16 runs across the three contests at Miller Park, and 15 of them were scored via dingers. On Sunday, the Cubs homered three times, with a grand slam and a pair of 3-run jacks leading to an 11-4 drubbing of the Brewers.

After getting removed from the leadoff position at the start of the series, Cubs left fielder Kyle Schwarber settled into a groove in the eighth spot of the batting order on Sunday. Going 3-for-3 with seven RBI, Schwarber tallied two long balls and single-handedly provided the Cubs with a commanding 7-0 lead. The Cubs tabbed seven hits on the afternoon, and Schwarber was responsible for nearly half of them. Schwarber's dominance also spoiled the start for Brewers hurler Zach Davies, who was taken deep on both of Schwarber's blasts during the course of his 5-inning outing.

Cubs starter Jose Quintana did not last particularly long on the mound, either, as he was taken out after 4 2/3 innings pitched, in which he gave up three runs. Schwarber's bat gave Quintana and the rest of the Cubs' pitching staff plenty of breathing room, though. In the top of the second, following a couple of singles and a walk, Schwarber crushed his second career grand slam on a 473-foot blast to right that marked the longest home run of the season by a Cub.

In his next at-bat, which came in the top of the fourth, Schwarber went yard yet again, as he lined a 3-run round-tripper over the wall in left-center that put the Cubs ahead by seven runs. Cubs shortstop Javier Baez led off the fourth by drawing his first walk since June 25. Schwarber now has 24 homers and 54 RBI to his name this year. The Brewers cut into the Cubs' sizable lead by pushing three runs across and chasing Quintana from the game in the fifth, but the Cubs' bullpen was able to bounce back after shaky performances in the previous two contests, keeping the Cubs in front the rest of the way.

The Brewers loaded the bases with no outs in the fifth, which led to Manny Pina putting his team on the scoreboard with a 1-out RBI single. Then, on back-to-back pitches, Lorenzo Cain skied a sacrifice fly that led to Christian Yelich smacking a bloop RBI double near the left-field line. Cubs reliever Brad Brach entered the game thereafter and collected a pivotal inning-ending strikeout, which left two runners stranded in scoring position, and the Brewers never seriously threatened the Cubs for the remainder of the matchup.

Christian Yelich knocks Quintana out of the game with a RBI double that drives in the #Brewers 3rd run of the inning! #ThisIsMyCrew pic.twitter.com/nPOh1ZE24e

A successful challenge by Cubs manager Joe Maddon gave way to the Cubs' second 3-run tater of the day. Schwarber hustled to beat out a throw at first base on a single to shallow right field in the top of the sixth, but he was originally called out to end the half-inning. Maddon challenged the call, and the ruling was overturned, thus extending the inning. Victor Caratini then stepped up to the plate in a pinch-hitting appearance and recorded his first career pinch-hit home run with an impressive 439-footer to right. The 3-run rainmaker, which served as Caratini's fifth homer of 2019, made the score 10-3 in favor of the Cubs.

Cubs leadoff man Robel Garcia committed a fielding error to start the bottom of the eighth, and, soon afterward, veteran Brewers slugger Ryan Braun hit an RBI double to center field. The Cubs got the run back in the top of the ninth, thanks to another wise challenge by Maddon. Much like Schwarber in the sixth, Cubs catcher Willson Contreras was called out on a close play at first base. It was initially ruled an inning-ending double play, but Maddon's challenge resulted in Contreras being called safe at first, which allowed the run scored by Schwarber, who reached base after getting hit in the foot by a pitch, to count.

Appearing in the second straight game, recently acquired Cubs reliever Derek Holland finished off the contest by way of a flawless ninth inning. With the 11-4 victory in the books, the Cubs avoided being swept by a National League Central rival. If not for Maddon's ninth-inning challenge, the Cubs would have scored every run of the series on home runs. The Cubs' bullpen fared well in the series finale, and the Brewers ended up with a modest five hits in total.