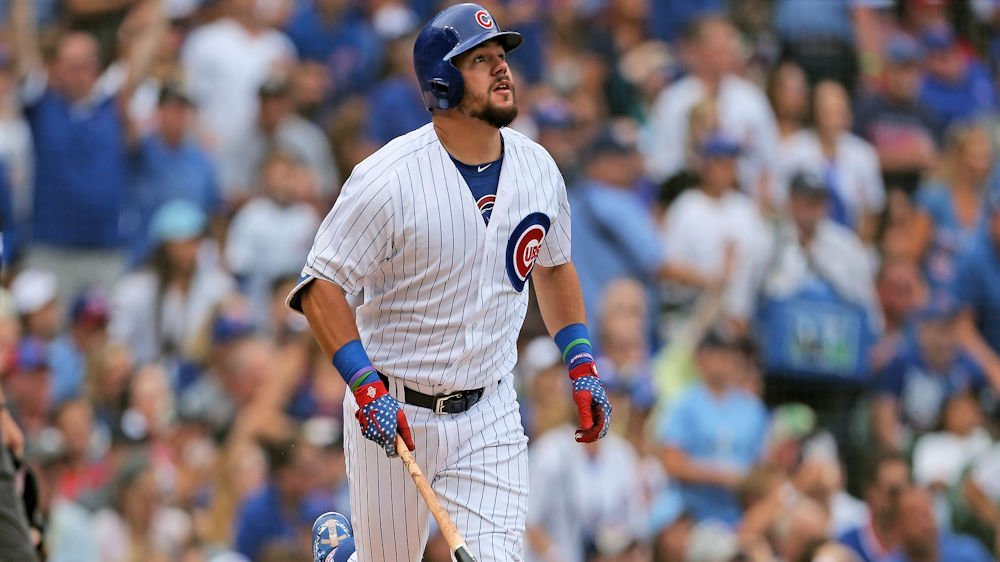 As the winter meetings get underway, players, teams and front office personnel are wining, dining and wooing one another to land that big off-season deal. The meetings are nothing more than a convention, save for the Rule 5 Draft, with the big stuff happening when the cameras are off, and interested parties head to a conference room or a suite. Let the cigars burn and let the brandy flow- it’s Vegas, and it’s Hot Stove time.

Schwarber NOT for sale: According to MLB insider Bob Nightengale, “Several teams have inquired on Cubs slugger Kyle Schwarber, but they’ve all gotten the same response from the Cubs: ‘No, he’s not available.’”

Cubs/Soria: Multiple reports are saying that the Cubs have interest in signing veteran righty reliever Joakim Soria. The 35-year-old has worked his way to a career 2.88 ERA over eleven seasons in the majors.

Cubs/Britton: Rumors are heating up that the Cubs may be contenders for landing Zach Britton. With questions surrounding Brandon Morrow’s return to the bullpen, Britton would make sense as a possible replacement for the closing role.

Tennessee Smokies: Congratulations to the Cubs’ Double-A affiliate for being named this year’s winner of the Bob Freitas Award, recognizing the club for organizational excellence.

Latest news and rumors from around the league:

Jayson Stark: According to Jayson Stark of the Athletic, “For players not named Machado or Harper, this offseason is starting to feel a lot like last year’s. And the union is concerned.”

From baseball to politics? According to a report by MSNBC, Yankees president, Randy Levine is being considered as a possibility to fill the position as White House Chief of Staff.

Jerome Williams: Former St. Louis right-hander, Jerome Williams has announced his retirement. Over eleven seasons, Williams compiled a 52-66 record (.441) and a 4.59 ERA. Williams is said to be at the winter meetings, resume in hand, searching for a coaching spot.

Braves: Atlanta is reported to have Dallas Keuchel, one reliever and one outfielder at the top of their wish list, with the focus, right now remaining on securing Keuchel.

Dodgers: Add Los Angeles to the list of at least six teams pursuing right-handed reliever, David Robertson. MLB Trade Rumors projects Robertson’s deal to be a three-year, $33M contract, which may leave L.A. out of the running. The team is also showing continued interest in 2B DJ LeMahieu. Finally, rumors say the Dodgers may be looking to trade Kenta Maeda to spur a trade for something they want- although what that “something” is, isn’t exactly clear yet.

Giants: The newest free-agent offering from Japan seems to like San Francisco, and the Giants may be atop Yusei Kikuchi’s list of places to sign. While awaiting a decision from Kikuchi, the Giants have also made inquiries about Padres’ reliever, Tyson Ross.

Padres: San Diego is confirmed to be in continued talks with the Yankees over a deal for Sonny Gray.

Reds: Cincinnati now reported having interest in trading second-baseman, Scooter Gennett. Gennett was expected to receive a contract extension, but according to the Reds’ front office, that isn’t a priority right now. Cincinnati is rumored to be looking at possible trades for Gennett with the Dodgers (for the starter, Alex Wood), with the Nationals (for Tanner Roark), with the Pirates (for Ivan Nova) and with the Yankees (for Sony Gray).

Royals: KC is reportedly close to striking a deal with former Reds’ center-fielder, Billy Hamilton. Details of the agreement are not known at this time but is expected to be around 5.25 mil total.

Yankees: After losing Nathan Eovaldi and Patrick Corbin in the free-agent wars, NY is said to be courting J.A. Happ. There is a caveat though: Happ is seeking a three-year deal, and the Yanks are reported to be willing to offer only two. NY is also said to be losing Zach Britton, as Britton wants the closing spot currently occupied by former Cubs’ closer, Aroldis Chapman. The Yanks are also reportedly in the hunt for Madison Bumgarner.