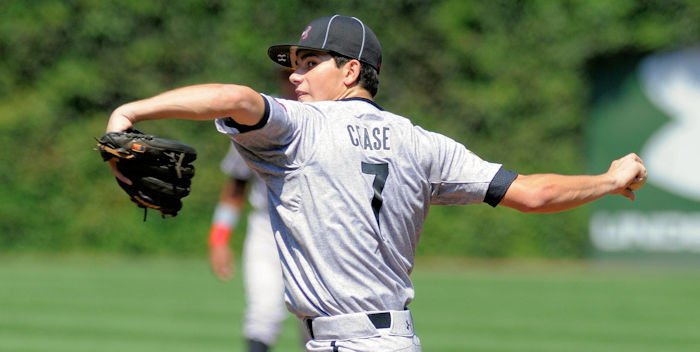 CHICAGO -- Most already know the Chicago Cubs have an abundance of talented infielders and outfielders in their farm system. There are players such as Eloy Jimenez and Ian Happ that gets fans excited about the future. Little do a lot know, they also have an intriguing pitcher that is coming up, who will bring the heat off the mound at Wrigley Field in a couple of seasons.

Dylan Cease may be the next top of the rotation starter or bullpen ace for the Chicago Cubs. The 21-year-old right-hander is currently the Cubs’ top pitching prospect. He is ranked 77th among MLB Pipeline’s prospects, 97th among Baseball America’s, and 4th in the Cubs organization.

Known as a flame-thrower who averaged around 91-95 mph, while topping at 97, Cease was considered to be a potential first-round draft choice by Jonathan Mayo of MLB.com before his senior year. Unfortunately, he experienced elbow soreness in the middle of a game during his senior season, which was diagnosed as a partial tear of the UCL of the elbow in his pitching arm. After the injury, his draft stock fell.

The Chicago Cubs drafted Cease in the 6th round of the 2014 draft, signing a $1.5 million bonus. After he had signed, he underwent Tommy John Surgery to repair the UCL.

Less than a year later in May 2015, Cease resumed throwing and pitched for the Arizona Cubs of the Rookie-level Arizona League. He posted a 2.63 ERA, 1.17 WHIP, struck out 25 batters in 24 innings pitched, and limited opponents to a .145 average. Pretty good for a someone who hasn’t pitched in more than a year. In 2016, Cease was assigned to Class A Short Season Eugene Emeralds, and put up a 2.22 ERA, 1.16 WHIP, and struck out 66 batters in 44.2 innings.

During his last two seasons after Tommy John Surgery, Cease has been lighting up the radar gun from with a blazing fastball around 96-99 mph, and occasionally hitting 100. Cease’s repertoire also consists of a curveball and changeup. His power curveball averages around 79-81 mph and compared to Dwight Gooden’s. His changeup is 81-85 mph with good deception.

Cease has a nasty repertoire that can rack up a lot of strikeouts but needs to work on command. So far, he has a 5.4 BB/9 rate out of his two seasons. Throwing hard looks good, and many young pitchers love to bring the heat nowadays, but command is the most important element to have to become a dominant pitcher.

Estimated to arrive in the Big Leagues next season or 2019, Cease is expected to play his first full season at Class A South Bend this season, and go up against more experienced hitters. Cease has a ton of talent and is a pitcher to look forward to when he finally gets his call up.