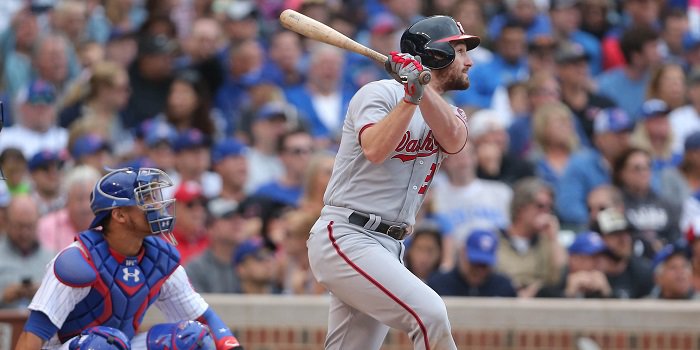 CHICAGO – In the 2015 NLCS, the Chicago Cubs were swept by the New York Mets. More specifically, they were swept by then-Met Daniel Murphy, as the second baseman hit .529 over the course of the series. Now the starting second baseman for the Washington Nationals, Murphy has continued to haunt the Cubs since joining the Nats prior to last season, often having good outings in games against the Cubs. Friday's game was no exception, as Murphy hit two home runs, collected three RBI and went 3-4 at the dish en route to leading Washington to a 4-2 victory on the road.

Making his third start since returning from a lengthy injury layoff, Cubs starting pitcher Kyle Hendricks was solid for the third straight outing, suffering only at the hands of Murphy. Allowing both of Murphy's jacks, Hendricks gave up three runs, and all three came via a long ball from the notorious Cub killer. Allowing five hits and accruing five strikeouts, Hendricks was fair in his seven innings on the bump, but he earned the loss to fall to 4-4, marking his first decision since late May.

On the offensive end, the Cubs were slow to the punch, perhaps due to the long, arduous duel that they had with the Arizona Diamondbacks on Thursday. Chicago amassed six hits in all on Friday, with all six coming via different batters. The lone offensive fireworks for the Cubs, who advanced a runner into scoring position only once through six innings, came in the seventh, when second baseman Javier Baez drew the Cubs to within one run on a two-run shot beyond center field. Scoring left fielder Kyle Schwarber, who began the bottom half of the seventh with a double to deep right, Baez's round-tripper brought the infielder's home run total to 15 on the year.

His two-run blast in the 7th cuts the #Cubs deficit to 3-2. pic.twitter.com/7IZbUGYmbR

With the exception of the two-run home run, Nats starter Tanner Roark pitched well in his 6.1 innings of work, giving up five hits and striking out four before being pulled following the Baez moonshot. The Nationals still maintained a lead following the seventh because of Murphy, as he hit a two-run bomb in the opening inning that was later succeeded by a solo shot in the sixth. Murphy now boasts 19 homers and 76 RBI this season.

Murphy had a hand in providing the Nats with some wiggle room in the eighth inning, as well, by batting a single to load the bases and place Cubs reliever Carl Edwards, Jr., into a jam. D.C. third baseman Anthony Rendon followed up Murphy's hit with a sacrifice fly that allowed Nats newcomer Howie Kendrick to score for the second time in the game.

Thereafter, the Cubs failed to threaten with the bat for the remainder of the game, losing 4-2 as a result to become 57-51 overall.

The Cubs were, quite simply, unable to escape the wrath of Murphy's law on Friday, as anything that could go wrong for Chicago when Murphy stepped up to the plate did go wrong. Roark earned the win for his effort to move to 9-7, and Sean Doolittle was credited with the save, his fifth of 2017. Riding Murphy's pair of dingers to a win, the Nats improved to 64-43 overall and prolonged the Cubs' recent struggles. Having now lost three in a row after losing just three times out of the All-Star break prior to that, the Cubs will look to revert back to their winning ways tomorrow in the second edition of their three-game series with Washington, a game in which the Cubs will assuredly aim to limit the production the bane of their existence, Daniel Murphy.