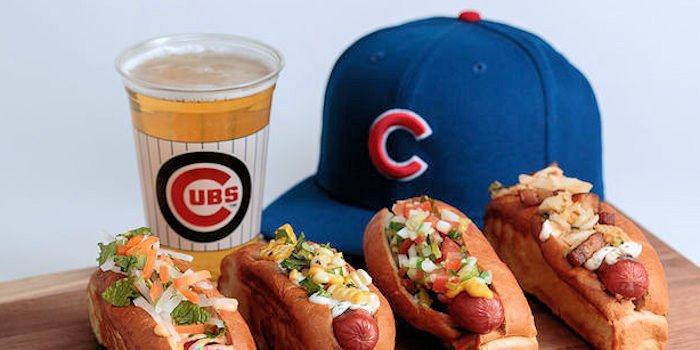 CHICAGO (Monday, April 3, 2017) – Wrigley Field boasts a worldly menu this season, courtesy of hospitality partner Levy. The Chicago Cubs and Levy enhanced their menus across dining destinations in the grandstand and Budweiser Bleachers in the offseason, adding top local restaurants, classic Chicago tastes in new packages, globally-inspired loaded hot dogs, and signature brews. Many of the new locations and menus will debut at the Home Opener, while full dining enhancements, including a special guest chef series, will open in June.

“We really focused on adding diverse flavors, super fresh ingredients, and creative new dishes to our menus, blending the best of Chicago’s food culture and restaurants,” said David Burns, executive chef for Levy at Wrigley Field. “Being able to prepare fresh food in a new 8,870-­square-?foot kitchen and commissary space is a game changer for us this year, and we’re excited to debut even more exceptional culinary creations later this summer.”

Globally-inspired flavors, classic Chicago tastes, and nostalgic dishes have been reinvented to serve multiple generations of fans and elevate the Wrigley Field menu this season. Levy and the Cubs crafted an array of new dishes served throughout the ballpark befitting the World Champions:

* Hot Doug’s: Decadent, alumni player-inspired sausages from the Chicago institution return on a rotating basis in the Budweiser Bleachers

Buona Beef: Celebrating a successful 2016, Buona Beef will be back in Platform 14 in the Budweiser Bleachers, along with a specialty combo cart located in the right field concourse

* Platform 14: What’s better than Hot Doug’s, an ice-cold Budweiser and a view of Waveland and Sheffield from the Budweiser Bleachers?