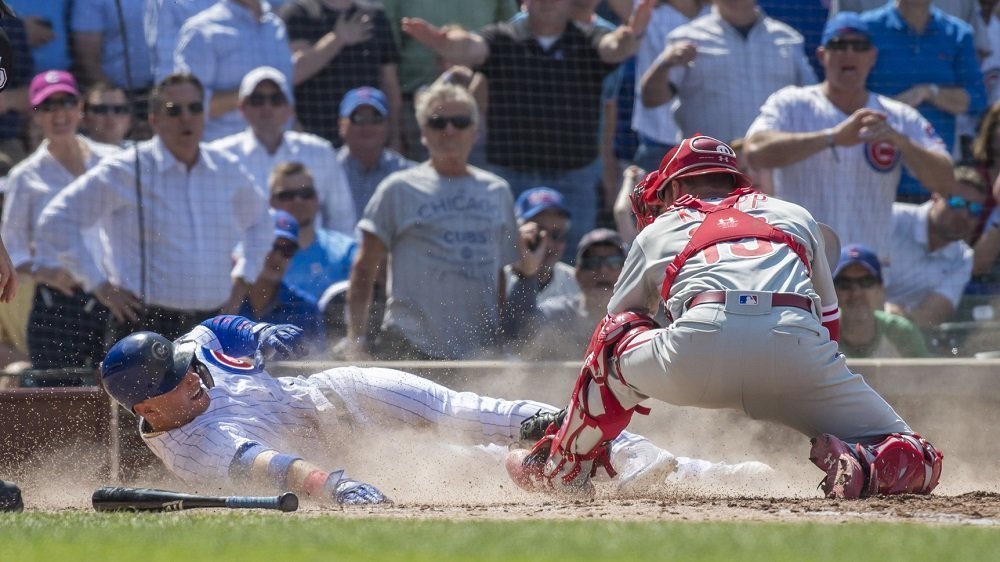 Albert Almora, Jr., scored what proved to be the winning run on an overturned call at the plate. (Photo Credit: Patrick Gorski-USA TODAY Sports)

After getting tagged out at home plate when attempting to score from third on a fly ball in the fifth, Albert Almora, Jr., was ruled safe after a review, due to the heavily debated obstruction rule. Proving to be the winning run, the play at the plate highlighted the Cubs' 4-3 victory in their series finale with the Philadelphia Phillies.

The Cubs could have easily found themselves in a deep hole early on, as starting pitcher Tyler Chatwood produced yet another shaky start. The embodiment of a pitching contradiction, Chatwood struggled mightily with his control but somehow worked himself out of several jams. Lasting 4.2 innings, Chatwood struck out six but walked seven as part of a one-run, four-hit outing.

Walks have been a persistent fixture of Chatwood's debut season with the Cubs. He has now issued 56 of them in 58.1 innings pitched and has walked by far more batters than any other pitcher this season. In fact, Chatwood has been taken for 17 more walks than next-closest pitcher, and his 20.1-percent walk rate is the highest in baseball.

On appearance alone, Phillies starter Nick Pivetta was far more sound on the mound than Chatwood, who threw several errant pitches near batters' heads. However, Pivetta was taken for four runs on six hits and one walk in five frames, receiving the loss to drop to 4-5 overall.

Pivetta's first run came in the form of a solo jack off the bat of Rizzo in the fourth. His 10th homer of the year, the 418-foot shot to right by Rizzo marked his 175th home run in a Cubs uniform. As a result, Rizzo passed the great Andre Dawson for sole possession of 13th place on the Cubs' all-time home-run leaderboard.

The Phillies evened the score in the next inning. Odubel Herrera earned a leadoff walk and then took second on a wild pitch by Chatwood. A few at-bats later, Herrera scored on an RBI single to right from Carlos Santana. The Cubs quickly regained the lead in the bottom half of the fifth, driving home three runs, including the one scored on the controversial play at the dish.

Pivetta was arguably left in for too long and should have probably been pulled after suffering a throwing error on a playable comebacker and proceeding to walk a pitcher to put runners on first and second with one out. He was left in the game, though, and the Phillies paid the price for it.

The right-hander issued three consecutive singles after that to provide Philadelphia with a 3-1 deficit. First, Almora, Jr., singled to left to load the bases. Then, Tommy La Stella smacked a liner into the 5-6 hole to drive in a run, and Kris Bryant followed that up with an RBI infield single on a hard-hit ball to shortstop. The ensuing at-bat saw Rizzo sky a fly ball to left that the speedy Almora, Jr., came home on.

Sliding in headfirst, Almora, Jr.'s, hand was intentionally blocked from the plate by Phillies catcher Andrew Knapp's foot. Knapp was in the process of fielding the throw from left field when moving his foot to obstruct Almora, Jr. Therefore, Almora, Jr., who was tagged without touching the plate and originally ruled to be out, would have likely remained out according to the old rule set. But the fairly new obstruction guidelines led to the call being overturned on a challenge by Cubs skipper Joe Maddon, as Knapp was ruled to have illegally impeded Almora, Jr., from touching home plate.

Phillies shortstop Scott Kingery got a couple of those runs back for his club in the sixth by hitting a two-run double off Cubs reliever Brian Duensing. Nevertheless, Duensing earned the win on the day for his one inning of work, improving his record to 2-0. The Cubs bullpen was steadfast for the remainder of the contest, as relievers Steve Cishek, Pedro Strop and Justin Wilson were all credited with holds for maintaining the Cubs' lead.

In the ninth, Cubs closer Brandon Morrow made up for the two-run home run that he gave up last night by accruing his 15th save. Leaving 13 runners stranded, including one in the final inning, the Phillies drew eight more walks than the Cubs but simply could not convert with men on base.

Despite giving up a base runner to Philadelphia in all nine innings, Chicago escaped with a 4-3 win, thanks to a significant overturned call on a play at the plate. Taking two out of three at home against the Phillies (32-28), the Cubs (35-24) have gone 10-3 in their last 13 games and are just half of a game behind the first-place Milwaukee Brewers (37-25) in the National League Central standings.