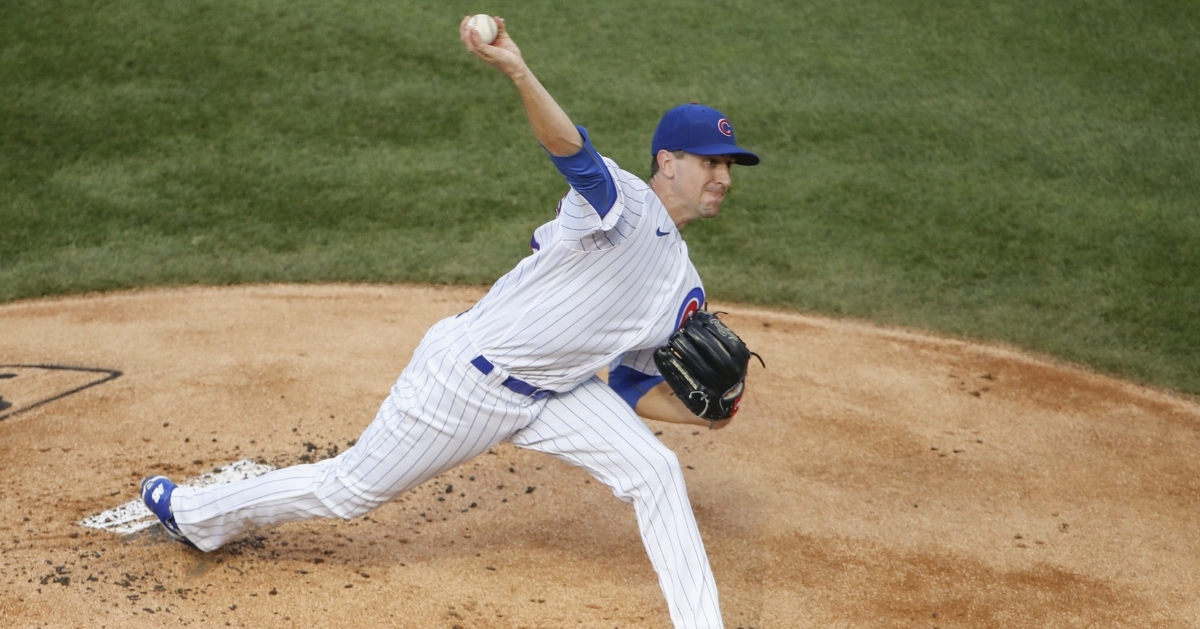 CHICAGO — Pitching a complete game shutout, Chicago Cubs (1-0) ace Kyle Hendricks started the 2020 regular season off in style, leading his squad to an Opening Day victory at Wrigley Field on Friday. The opposing Milwaukee Brewers (0-1) tallied just three hits, which were all batted by one player, and were struck out nine times.

Hendricks did not issue any walks, and the Brewers failed to advance a runner into scoring position, with the Cubs earning a comfortable 3-0 win. The Cubs' three runs came via a pair of dingers. Ian Happ smacked a two-run shot to break the scoreless tie, and Anthony Rizzo chipped in with a solo dinger late in the game.

Kyle Hendricks is the first @Cubs pitcher to toss a shutout on #OpeningDay since 1974 (Bill Bonham). pic.twitter.com/GOvAgmkhmA

T1: Hendricks got off to a good start, sitting the Brewers down in order. For the third out, Hendricks caused Keston Hiura to swing and miiss at a nasty curveball for strike three.

B1: With Brandon Woodruff toeing the rubber for Milwaukee, Anthony Rizzo drew a one-out walk. However, Javier Baez then grounded into an inning-ending double play.

B2: The Cubs suffered their second inning-ending double play of the evening. Jason Heyward, who began the game by running out to right field while carrying the Chicago flag, hit a grounder that turned into a 5-6-3 double play.

T3: Orlando Arcia tabbed a two-out base knock, but the Brewers remained scoreless.

B3: Nico Hoerner's one-out single was followed by the Cubs' first dinger of the 2020 regular season. Happ smoked a Woodruff sinker 422 feet out to center field, putting the Cubs up 2-0.

T4: Hendricks struck out the side, continuing to dominate by way of filthy breaking balls.

B4: The Cubs were unable to reach base in the fourth, with Woodruff fielding a comebacker for a groundout and striking out the next two batters.

T5: Milwaukee grounded out in three straight at-bats for an uneventful top half of the fifth.

B5: Serving as the designated hitter, Victor Caratini roped a double into the right field corner to lead off the bottom of the fifth. A groundout and a pair of strikeouts ensued.

T6: Arcia singled for the second time, but he was left stranded when Christian Yelich swung and missed at an outside changeup for the third out. Prior to the game, Yelich damaged the scoreboard beyond right field when he slugged a home run into it during batting practice.

He hasn't even played a game yet and Yelich is already busting up scoreboards in 2020 ??

B6: Woodruff did not retake the mound to start the bottom of the sixth. Two Brewers relievers worked a scoreless sixth, in which Baez reached base with one out because of a fielding error committed by Brewers first baseman Justin Smoak.

B7: Making his return from Tommy John surgery, Brewers pitcher Corey Knebel sat the Cubs down in order in the seventh.

B8: Anthony Rizzo went down to one knee and swatted a solo shot over the right field wall. The two-out shot signified that Rizzo was not injured when he was hit in the hand with a pitch earlier in the game.

T9: Hendricks finished off his shutout, MLB's first complete game opener since 2013. Arcia registered his third hit of the game, but Cubs skipper David Ross, who won his regular season managerial debut, opted to let Hendricks stay on the mound and earn a complete game.

Milwaukee Brewers: the entire batting order, except for Arcia

Up Next: On Saturday, July 25, the Cubs and the Brewers will face off again for game two of the three-game set at the Friendly Confines. Cubs ace Yu Darvish (0-0, 0.00) will look to carry forward his success from last season when he makes his season debut against Brewers starter Corbin Burnes (0-0, 0.00). The contest will begin at 12:05 p.m. CDT.