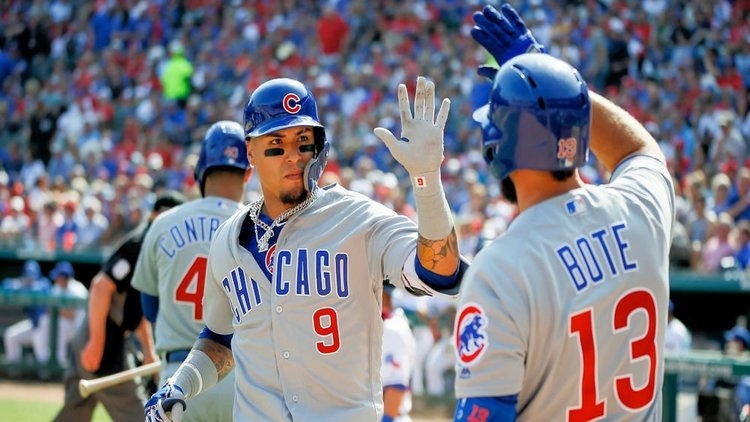 As fun as it to watch the Cubs fill up the scoreboard with runs, the real key to their success is their ability to get outs. When the Cubs are at their best, they are among the best defensive teams in the league. The number of versatile defensive options they have on the infield allows them to shift at a lower rate while still getting plenty of outs for a pitching staff filled with ground ball pitchers. With all the options the Cubs have on the infield, it was hard to determine who ranks the best defensively, but here we go:

1. Javier Baez: Even with all the good defensive players the Cubs have, nobody can compare to “El Mago.” He offers a unique combination of great instincts, quick hands, and a rocket arm. Baez is arguably the best defender at 3 out of the four infield spots. The versatility of Baez makes him an incredible asset as he showed earlier in his career by playing a new position nearly every night.

The only reason Baez has not won any gold gloves is that he hasn’t been a regular at any position. Baez has saved 35 runs in his career with the most at any position being 19 at second base.

2. Anthony Rizzo: Anthony Rizzo has been one of the best defensive first basemen in baseball over the past few years, and he has two gold gloves and one platinum glove to show for it. Rizzo competes hard every day and is best at picking balls out of the dirt on low throws. While these plays are hard to quantify from a statistical standpoint, we can see Rizzo has a knack for saving errors.

Rizzo is an outstanding athlete for his size, as displayed by his great tarp catches. Rizzo is exceptionally consistent, and one of the most reliable players the Cubs have on the field.

3. Addison Russell: Russell’s best season came in 2016, but he has still been a capable defensive shortstop since then. There has been a lot of noise surrounding Russell and his future with the Cubs after he was suspended for domestic violence allegations. The Cubs stuck with Russell and will now have him playing shortstop in the future.

Russell has shined with the glove ever since he was called up, including being 5th in the majors among defensive runs saved by shortstops last season. Russell’s best attribute is his ability to get to nearly any ball. He was ranked 2nd last season in shortstop range.

4. David Bote: Bote has not had as many opportunities in the field as some of the other Cubs, but his defense is outstanding. Bote caught Brian Butterfield’s attention with his work during fielding drills a couple of spring training ago, and that ultimately propelled him to the majors.

Bote is a very technically sound baseball player, and his mechanics make him one of the Cubs top infielders. He may not make as many dazzling plays as some other guys around the league, but he is a sure-handed, reliable defender who can play multiple infield spots.

5. Kris Bryant: Bryant’s athleticism has helped him significantly improve his defense. The worry with him, even when he was a prospect was if he could play third base at a high level. Bryant has, for the most part, answered these concerns and turned himself into a solid defensive player. Bryant has improved at third, while also spending time learning how to play the outfield.

He has a big arm which helps him make plays from his backhand, but he does tend to airmail some throws on routine plays.

6. Ben Zobrist: Zobrist may not be the guy he was with Tampa Bay, who could play anywhere on any day, anymore, but he is still a productive player. He is now used primarily at second base or as a corner outfielder, but he is very consistent and does not make many errors. Zobrist’s arm is not all that strong, but as a second baseman, he makes all the routine plays and doesn't give teams any extra outs.

7. Daniel Descalso: Descalso ranks very similar to Zobrist in many ways. He is not very flashy but does not make many errors. Descalso is not a bad fielder; he is just ranked at the bottom because he plays with such a dynamic infield. He can play anywhere on the diamond, but his arm is best suited for second base.