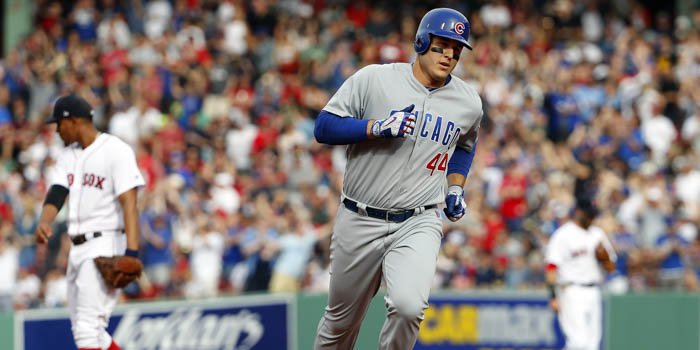 By hitting so many crucial home runs, Chicago Cubs first baseman Anthony Rizzo is making an MVP case for himself through the first month of the season. Credit: Winslow Townson-USA TODAY Sports

BOSTON -- The Chicago Cubs have shown a propensity this season to mount comebacks via the usage of critical hits, specifically home runs. Today, with three home runs taking place after the Cubs fell behind 3-0, Chicago topped the Boston Red Sox by a final score of 7-4 at Fenway Park. Overcoming yet another bad start from former Red Sox pitcher John Lackey, the Cubs were able to gradually figure out and wear away at knuckleballer Steven Wright of the Red Sox en route to a 10-hit victory.

Lackey struggled early, a theme of his season thus far. Red Sox center fielder Jackie Bradley accrued his only hit of the game with a single that scored first baseman Mitch Moreland in the second inning. Boston shortstop Xander Bogaerts led off the ensuing inning with a triple to deep right and was brought home soon after via a Andrew Benintendi sacrifice fly, which was one of two RBI for Benintendi on the day. Later in the inning, designated hitter Hanley Ramirez absolutely demolished a Lackey pitch over the Green Monster for a solo shot that put the Sox up 3-0.

True to recent form, Chicago first baseman Anthony Rizzo came to the rescue with the Cubs facing a foreboding deficit, hitting a two-run homer, his sixth of the year, that scored third baseman Kris Bryant. Bryant, who currently boasts a 10-game hitting streak, doubled to left-center to start the inning. Bryant finished 2-4 with one walk and two runs scored.

Benintendi answered Rizzo's homer with one of his own in the fifth inning, hitting his third round-tripper of 2017 to lead off the fifth frame. Bryant led off the top of the following inning with a double and was later scored on an RBI groundout by Ben Zobrist, who started in left field today.

Lackey's outing was ended by Cubs manager Joe Maddon after six innings. Giving up eight hits and four runs, Lackey, whose ERA stands at 5.10, was in line for the loss, but the Red Sox opted to leave Wright in the game a little too long. In the seventh, Cubs catcher Miguel Montero, who experienced perhaps his best game of the season at the plate today, hit a home run to right that knotted the game up at four. Montero finished 2-4 at the dish and now has two long balls to his name this year.

Soon after, Robby Scott replaced Wright on the mound, inheriting a runner on second. Kyle Schwarber, serving as the designated hitter, put the Cubs on top for the first time with an RBI single to center, which sparked a second pitching change. Middle relief pitcher Ben Taylor gave up an additional run on an error-plagued play that enabled Schwarber to score. The Red Sox struggled defensively on Saturday, committing a whopping four errors.

The Cubs nearly benefited from an error again in the eighth inning, finding themselves in a bases-loaded situation because of one, but nothing came of it. Zobrist made Chicago's lead rather comfortable in the ninth, though, hitting his third home run of the season with a bomb to left off of Taylor that placed the Cubs up 7-4, a lead that stood intact. Cubs closer Wade Davis finished the game off in the bottom half of the ninth and collected his sixth save as a result.

With the 7-4 win, the Cubs moved to 13-10 on the season and dropped the Red Sox to 12-11 in the process. The Cubs have experienced several comeback wins this season, and today's victory was one of the more impressive ones of the opening month for the North Siders. Surprisingly, despite his subpar outing, Lackey accrued the win on the day and is now 2-3 overall. Wright was named the game's loser and fell to 1-3. The Cubs will be looking to claim a series victory tomorrow when they take on the Red Sox in the rubber match of their three-game interleague clash.

.@ARizzo44 slugs a two-run homer in the 4th! #TeamRizzo pic.twitter.com/tKgW8Z6WBq