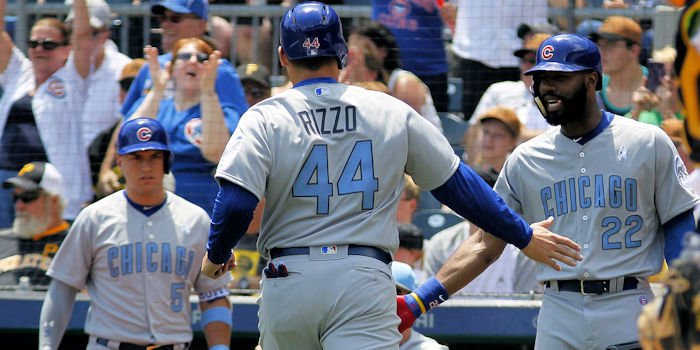 PITTSBURGH -- The Chicago Cubs gave their fans a special treat on this Father's Day as they were victorious 7-1 against the Pittsburgh Pirates. The Cubs climbed back to .500 on the season with a 34-34 record with Sunday's win as they took two out of three from the Pirates in the three-game series. It was the first road series win for the Cubs since they defeated the Pirates two out of three on April 24-26.

Anthony Rizzo continued his torrid hitting as the new leadoff hitter with a double to start off the game. Wilson Contreras cranked his 13th double of the season on a line drive to center field to put the Cubs up 1-0.

Contreras continued to get the job done in his first time in the third position in the batting order this season with another double that scored Jon Jay and Anthony Rizzo to add to the Cubs lead at 3-0 in the third inning. Contreras finished the day with three hits total.

Cubs outfielder Jason Heyward had a left-hand abrasion while sliding for a baseball in foul territory but stayed in to bat in the third inning where he lined out on the play and then was substituted on defense when the team when out for the fourth inning. His wrist was seen wrapped up in the dugout as he received treatment from the team doctor. Hopefully, he was just taken out for precautionary reasons and will be playing in the next homestand against the San Diego Padres.

In the fourth inning, Jay singled to left field to score Javy Baez to increase the lead at 4-0 over the Pirates.

The Pirates finally got on the board with a solo homer by Jordy Mercer to put Pirates within three runs at 4-1.

Veteran righty John Lackey finished six strong innings to receive his fifth win of the season giving up only two hits including a solo homer and three walks while striking out four batters.

In the seventh inning, Rizzo put the game out of reach with a two-run homer to put the Cubs up 6-1. The ball had an exit velocity of 105.5 mph and traveled an estimated 425 feet. It was his third hit of the afternoon and his 150th homer of his career which surpassed former Cubs first baseman, Mark Grace on the all-time Cubs homer list. Since being named to the leadoff position, Rizzo is batting .429 with three homers (13% homer rate), eight RBI, and two walks.

Cubs rookie Ian Happ showed off his impressive power display with a solo shot into the Pirates bullpen in the eighth inning to put an exclamation on the evening putting the Cubs up 7-1. The blast was his eighth homer of the season and it had an exit velocity of 100 MPH and traveled an estimated 416 feet. The homer was the first for Happ batting right-handed in his young major league career. Amazingly, has 23 hits on the season including seven singles, seven doubles, a triple, and eight homers.

The Cubs will now head back to Wrigley Field for a series against the San Diego Padres before another road trip.