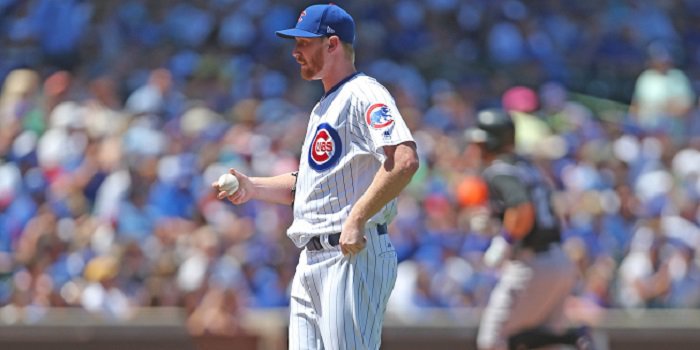 CHICAGO -- The 2016 MLB season saw the Chicago Cubs get swept a mere three times. Now, a little over two months into the 2017 season, the Cubs have already been swept four times, and, based on today's showing, they could very well be on the brink of experiencing number five.

Falling to the Colorado Rockies (41-23) by a score of 9-1 in the third game of the four-game affair at Wrigley Field, the Chicago Cubs (30-31) were useless at the plate for the vast majority of the game. Collecting a mere five hits and drawing one measly walk, the Cubs did not threaten the Rockies whatsoever after Colorado took an early 2-0 lead and refused to look back.

In the first two games of this series, the Cubs were practically helpless at the plate when facing Colorado's starting pitching, and this afternoon extended that trend. Second-year Rockies right-hander Jeff Hoffman resembled the great Trevor Hoffman on the mound today, throwing smoke and holding the Cubs to one run in 6.1 innings pitched. Prior to the seventh inning, Hoffman only gave up one hit and one walk, striking out eight and dominating the Cubs' hitters throughout that stretch.

Starting pitcher Eddie Butler of the Cubs, meanwhile, failed to show out against a Colorado team that traded him this past offseason. Butler struggled from the start, falling down 2-0 in the first inning. In the opening frame, Butler gave up a leadoff hit to Charlie Blackmon and an ensuing double to D.J. LeMahieu that scored Blackmon. The Rockies added to their early lead two at-bats later when third baseman Mark Reynolds hit an RBI double to deep center. Reynolds had himself quite a game, finishing 4-5 with two RBI and two runs scored.

The Cubs experienced their only offensive success of the early portion of the game in the opening inning. Third baseman Kris Bryant drew a walk with one out that was followed up by a single off the bat of first baseman Anthony Rizzo, which pushed Bryant to third and enabled Rizzo to take second on the throw. However, the Cubs' season-long issue of struggling with runners in scoring position plagued them yet again, with a strikeout and a groundout dashing Chicago's scoring chances.

Reynolds increased the Rockies' lead to three runs at the start of the fourth, booming a home run over the wall in left field for his 17th long ball of the season, which is tied for the lead in the National League. Butler managed to last through the fifth inning, getting taken for six hits and three runs in the process, which dropped him to 3-2 overall.

Not helping Butler's cause was a glaring lack of run support. The Cubs finally managed to muster some offensive production in the seventh, but it was too little, too late. Colorado added another solo shot in the top half of the seventh when Blackmon took Brian Duensing deep on a jack to right. Blackmon, who has been a thorn in the Cubs' side for the entire series, went 2-4 at the plate on the day.

In the bottom of the seventh, the Cubs neutralized Blackmon's bomb by scoring a run of their own, but struggles with runners in scoring position continued. With men on first and second after consecutive one-out singles, the Cubs were in solid position to mount a comeback. Catcher Willson Contreras did his part by adding his 25th RBI of the year on a single to center that scored the speedy Jason Heyward from second, but the promising inning soon fell apart for Chicago.

Thereafter, Hoffman was relieved of his duties on the hill by veteran Chad Qualls, who forced the next batter into a fielder's choice groundout. Another strategic pitching change then took place, and Rockies reliever Mike Dunn entered the game and made quick work of the Cubs, ending Chicago's scoring threat by getting Jon Jay to hit an inning-ending liner to shortstop.

The Rockies put the game out of reach for the Cubs in the top of the ninth, tacking on five more runs to go up 9-1. With the bases loaded and two outs, Cubs reliever Pedro Strop, who had entered the game with runners on first and second and two outs, was victimized by Rockies third baseman Nolan Arenado. His only hit of the day, Arenado's bases-clearing double gave the Rockies a six-run advantage.

For some reason, Strop remained in the game after that, proceeding to give up an infield single and throw a wild pitch that brought in a run. Even then, with the Cubs down 8-1, Strop stayed on the bump, and Colorado's Ian Desmond took advantage by hitting an RBI single to left.

Losing by an embarrassing eight-run margin, the Cubs capped off perhaps their worst showing of the season by allowing the Rockies to pour it on with a five-run ninth. Collecting only 13 hits in three days, the Cubs have definitely been inferior to the Rockies so far in this series, as Colorado accrued 14 hits in Saturday's game alone. Hoffman earned the win on the day for his efforts, moving to 4-0 after an outstanding performance for the young hurler.

Chicago is now a miserable 5-10 in its last 15 games, struggling at the plate and on the mound quite regularly since late May. The Cubs will look to right the sinking ship in tomorrow's series finale against the Rockies before they go on a six-game road trip against the New York Mets (26-33) and the Pittsburgh Pirates (26-35).