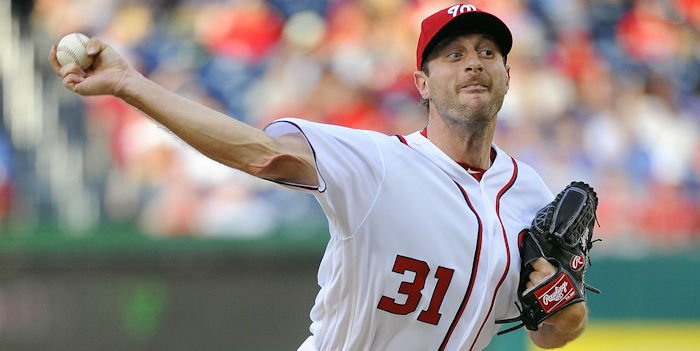 WASHINGTON -- Matt Scherzer struck out nine of the first ten Cubs batters and retired the first sixteen overall to lead the Nationals to a 4-1 win over Chicago. The loss was the first for the Cubs against Washington this season after sweeping a four-game set at Wrigley earlier this year.

Scherzer was dominant all night as he had a perfect game after 5 1/3 innings when the Cubs finally got to him on a solo home run by Addison Russell down the left-field line after a nine-pitch battle.

Chicago was not able to build on the momentum of breaking up the perfect game in the bottom of the inning. The Nats got the winning runs on a solo home run by Wilson Ramos and RBI singles by Ben Revere and Danny Espinosa for the final margin.

Anthony Rizzo extended his hitting streak to 10 games with a two-out double in the 7th off of Scherzer (8-4, 3.40) who allowed just two hits while striking out 11. The Cubs had just two baserunners the entire night and struck out sixteen total times. Chicago also had two more errors which gives them nine errors in the last three games.

Hendricks (4-6, 3.05) was the tough luck loser on the night as he pitched 5 1/3 innings, giving up three runs to the Nationals high-powered offense while striking out four.