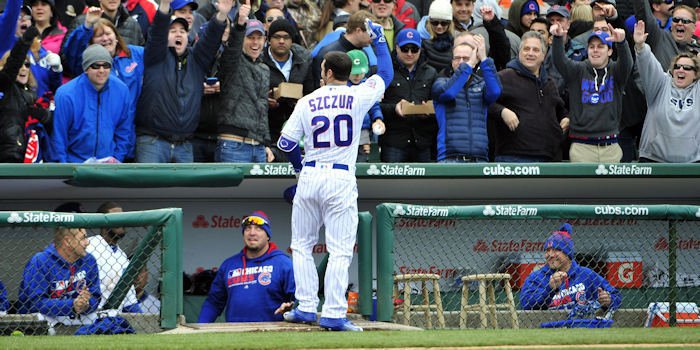 The Cubs improved to 17-5 while Atlanta fell to 5-18. The marks represent the major’s best and worst records.

The teams were tied at 1-1 going into the bottom of the eighth, but three Atlanta pitchers ran into trouble in the inning. Jim Johnson pitched just a third of an inning, giving up three earned runs and falling to 0-3 on the season. Johnson left with the bases loaded and one out and was replaced by Eric O’Flaherty. O’Flaherty’s 0-1 pitch to Szczur was deposited into the left field bleachers for a 6-1 Cubs lead.

The grand slam was the first of Szczur’s career – all of his previous four homers had been of the solo variety. David Ross singled home Javier Baez in the fifth to tie it for the Cubs before Rizzo’s bases-loaded single made it 2-1 in the eighth.

Jon Lester danced in and out of trouble all afternoon, but pitched seven strong innings and gave up just one run, a solo homer to right by Freddie Freeman in the fourth. Lester walked two but struck out 10 and didn’t figure in the decision. Pedro Strop pitched a clean eighth – including two strikeouts – in earning his first win of the season.

Closer Hector Rondon pitched the ninth in a non-save situation.