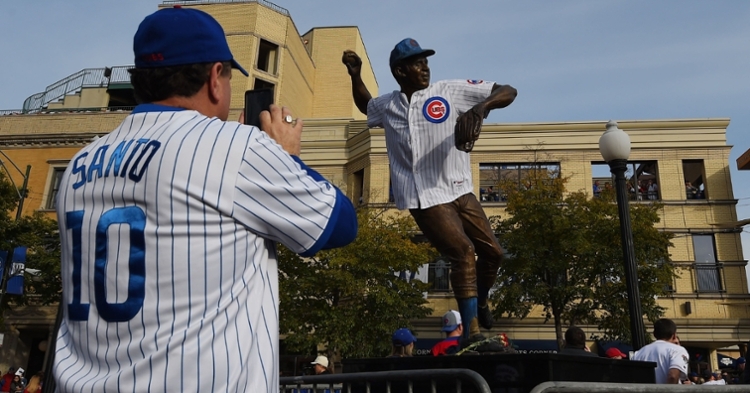 Here are the all-timers with the Cubs at the hot corner.

Ronny was everything it meant to be a Cub, the joy and the heartbreak intertwined. Santo showed it off on the field and supplemented that in his time in the broadcast booth.

Santo has a flag flying in left field for the immense impact he made in Chicago and was finally named to the Hall of Fame in 2012.

Santo’s boyish features are similar to those of Bryant’s, quickly making him a fan favorite in the sixties.

Santo never got to experience true winning in Chicago, but he did earn five gold gloves and nine all-star game appearances in what was a truly remarkable career.

That all was more than enough to earn Ronny the number one spot on our top third baseman list in Cubs history.

Kris Bryant could have easily been number one on this list, and very well may end up there, but because he is not a Hall of Famer *yet* he comes in at two on our third basemen list.

Bryant, the player who fielded the groundball that was eventually turned into the out that clinched the Cubs’ first World Series Championship in over a century.

But Bryant’s contributions to the Cubs in his five-year career have been plentiful. He was the Cubs' most hyped-up prospect ever and has consistently delivered. He was named college player of the year and minor league player of the year before hitting his way to the big leagues.

Bryant has bounced around being a very versatile player, but the majority of his career has been at third base. His 138 homers are the most by a Cub in his first five seasons, and Bryant has also been named to three all-star games, among other accolades.

Bryant could continue to climb this list, especially if his days in Chicago aren’t numbered — but as it sits now, he is the second-best third baseman the Cubs have ever had.

The early 2000s, like most of the 20th century, was a challenging time to be a Cubs fan. But Aramis Ramirez was one of the staples on a few good teams the Cubs had and one of the only bright spots on some of the Cubs’ bad teams.

A-ram began his career with the Pirates, went to the Chicago Cubs for 11 years of his 18-year career, and finished his career bouncing around the division until 2015.

Ramirez was named to three all-star games in his career, won a silver slugger award, and was a fan favorite at Wrigley Field.

The most iconic of Ramirez’s contributions to the Cubs came on a walk-off grand slam against the rival White Sox, and his contributions have also earned him a spot on our count down.