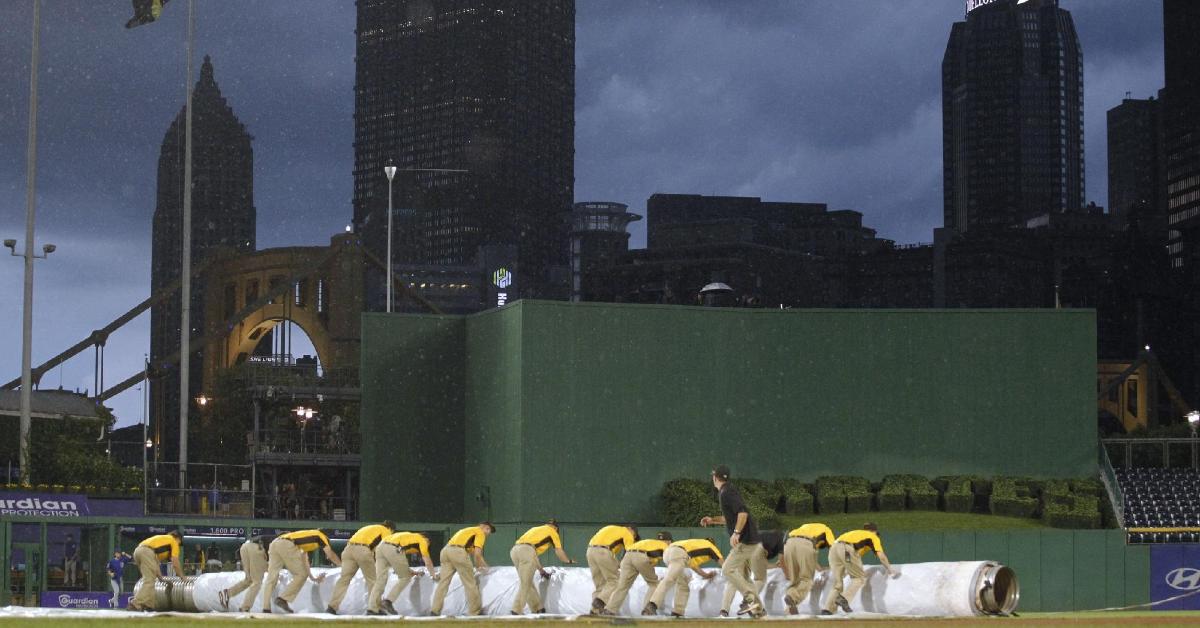 A squall at PNC Park resulted in a rain delay that spanned a little over two hours on Tuesday night. (Credit: Charles LeClaire-USA TODAY Sports)

PITTSBURGH — A rainy night in the Steel City came with a dreary outcome for the Chicago Cubs (45-41) on Tuesday. In a contest between the North Siders and the Pittsburgh Pirates (41-43) that featured a rain delay of just over two hours in length, the Cubs were unable to plate a run until the final inning, with the Pirates winning 5-1 at PNC Park. Cubs starter Kyle Hendricks returned from the injured list and pitched just three innings because of the weather delay. Following Hendricks' departure, the Pirates took control of the contest via a 3-run home run in the bottom of the fourth and ultimately handed the Cubs their third straight loss.

Hendricks was activated off the injured list on Tuesday afternoon and made his first start since suffering a shoulder injury in mid-June. The right-hander found himself in a jam early on, as the Pirates advanced runners onto first and third with one out in the first. A sacrifice fly by Josh Bell ushered home a run, but Hendricks collected an inning-ending strikeout after that to minimize the damage. In the bottom of the third, the Pirates increased their lead to two runs, thanks to a pair of doubles. Adam Frazier hit a 1-out 2-bagger, and, soon afterward, Starling Marte came through with a 2-out 2-bagger that enabled Frazier to score.

Meanwhile, the Cubs' offense had few answers for Pirates starter Joe Musgrove. Musgrove struck out four and allowed just one baserunner in his three innings of work, but he was not brought back in following the rain delay, which began prior to the top of the fourth. Former starter Francisco Liriano, who has been coming out of the bullpen this season, toed the rubber for the Buccos after the break in the action, and he was one of five relievers to pitch for the Pirates as part of solid bullpen showing by Pittsburgh. The rain continued to fall intermittently throughout the remainder of the game, and, in the end, the Cubs were the team left out to dry.

Cubs reliever Dillon Maples replaced Hendricks at the start of the bottom of the fourth, and he gave up two hits before being yanked in favor of Mike Montgomery. In the first at-bat of Montgomery's stint on the mound, Frazier hammered a 3-run blast to right that put the Pirates up 5-0. Thereafter, the Cubs did not seriously threaten to score until the top of the ninth. A fantastic sliding catch made by right fielder Jason Heyward in the sixth highlighted the defensive efforts for the Cubs, but a lack of plate production doomed them. Chicago tallied three hits in the ninth, including an RBI double hit to the wall in left field by catcher Willson Contreras that prevented the Cubs from being shut out. However, a legitimate comeback never materialized, and the Cubs dropped to 16-25 on the road via the 5-1 loss.