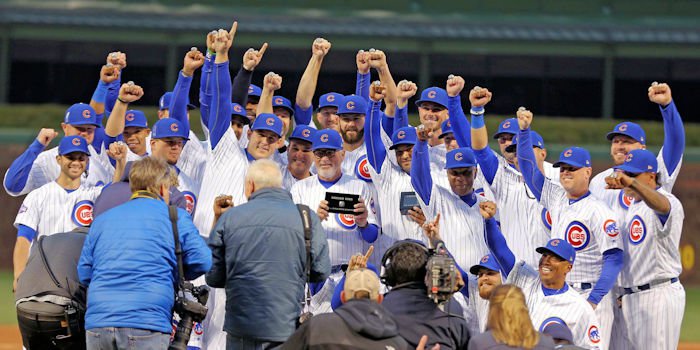 CHICAGO -- Tonight's game between the Los Angeles Dodgers and the Chicago Cubs was effectively over for the latter a mere three pitches in. Dodgers right fielder Andrew Toles hit his second home run of the season on just the third pitch of Wednesday's matchup, and the Dodgers never looked back, winning 2-0 and spoiling what was otherwise a special night for the Cubs and the Wrigley Field faithful.

With World Series rings getting distributed prior the game and the first pitch being thrown out by everyone's favorite professional-catcher-turned-amateur-dancer, David Ross, the energy was just as high in Wrigley Field tonight as it was during Monday's home opener. Appropriately, yet ironically, Ross, who retired as a Cub following the 2016 season, threw his pitch to former battery mate and current Cubs starting pitcher Jon Lester, a reversal of the situation that both players thrived from when playing together with the Boston Red Sox and the Chicago Cubs.

The Cubs and Dodgers entered the game with the second and third-lowest ERAs in baseball, respectively, and Game 2 of their three-game series lived up to that statistic. A matchup of two proven veterans, John Lackey of the Cubs faced off against Brandon McCarthy of the Dodgers in a 10-hit game on Wednesday evening.

The first inning did not progress very smoothly for Lackey, who was forced to work himself out of a jam after allowing a double to Los Angeles shortstop Corey Seager not long after the gutpunch homer by Toles. Later finding himself in a bases-loaded situation, Lackey struck Dodgers second baseman Chase Utley out looking to end the inning and escape with a manageable 1-0 deficit.

However, Lackey was not provided with much support at the plate from his teammates, resulting in the 1-0 deficit standing the test of time. Interestingly enough, a lack of offensive production during Lackey's starts was a frequent occurrence last season, and, although the Cubs did hit for John in his first start of 2017, that theme made a reappearance tonight.

The Cubs grounded into three double plays in the first four innings alone and were unable to develop any sort of rhythm with the bat. The only realistic scoring opportunity for the Cubs came in the bottom of the third when catcher Willson Contreras led off with a gutsy bunt single up the third base line. After Lackey subsequently bunted Contreras over, the Cubs were in excellent position to knot the game up at one run apiece.

Center fielder Jon Jay hit a grounder to the pitcher thereafter, and Contreras made another bold move by attempting to take third. However, this time, Contreras was not so fortunate, as he was thrown out. In the scramble to tag Contreras out, Jay was able to advance as far as second base, but, following a walk of the next batter, Chicago third baseman Kris Bryant flied out to right to end the inning.

In the fifth, Cubs right fielder Jason Heyward continued his solid start to the season by hitting a lead-off single to right-center and proceeding to steal second for his first swipe of 2017. Nothing came of it, though, as the Cubs wasted that scoring opportunity, as well, with Heyward getting stranded on base as the game shifted into the sixth inning.

The Cubs' experience on the base path tonight was far from pleasant, with Contreras' pickle serving as the prime example. The bottom of the sixth saw an additional Chicago scoring chance eradicated when the Dodgers challenged a two-out Kris Bryant steal that replay revealed to indeed be a tag out, bringing the inning to a sour ending for the Cubs.

Following a rousing rendition of "Take Me Out to the Ball Game" by Ross, as well as pitching change, the Cubs were unable to muster any magic from the bottom of the seventh on. Cubs reliever Mike Montgomery forced Dodgers pinch hitter Justin Turner to hit into a double play that enabled the Cubs to escape a one-out, bases-loaded jam in the eighth, thus firing up the bleacher creatures at Wrigley. But Chicago was unable to convert that momentum swing into runs.

After a rarely seen fielding blunder by Dodgers first baseman Adrian Gonzalez allowed Albert Almora of the Cubs to take first base on what should have been an easy out for Los Angeles, the Cubs once again faltered with a possible scoring opportunity brewing. With two consecutive strikeouts, Chicago ended the eighth inning and ushered in the ninth with a zero still on the scoreboard next to the Cubs' name.

The Dodgers added an insurance run in the ninth when a dropped third strike was followed up by an errant throw from Contreras that allowed Utley, who was on first at the time, to score. Cubs first baseman Anthony Rizzo, who was 2-4 on the night, attempted to spark a comeback in the bottom half of the inning when he singled with one out, but L.A. closer Kenley Jansen redeemed himself from Monday night's loss by forcing the next two batters to each hit into outs and securing a 2-0 win for the Dodgers in the process.

Despite pitching a solid six-inning outing in which he struck out 10 batters, Lackey (1-1) was credited with the loss for a losing effort by Chicago that was far from his fault. Accruing only five hits, the Cubs, aside from Rizzo, were fairly impotent at the plate tonight. To be fair, the Dodgers only collected five hits themselves, but Toles, who went 2-5 at the plate, proved to be the man of the match with his clutch hit that resulted in what proved to be the winning run for Los Angeles.

McCarthy earned the win for his efforts after giving up only four hits in six innings on the hill, moving the Dodgers starter to 2-0 on the season. Jansen, meanwhile, accrued his second save of the year, not allowing a Rizzo single to ruin his night this time around. Tomorrow afternoon, McCarthy and Jansen will have the opportunity to watch Brett Anderson (0-0), their former compatriot on the Dodgers' pitching staff, pitch for the Chicago Cubs (5-3) as he takes on the Los Angeles Dodgers (5-4), his old team, in the rubber match of this 2016 NLCS rematch. Hyun-Jin Ryu (0-1) is set to start for the Dodgers on the mound, with first pitch of the series tiebreaker slated for 1:20 PM CST at Wrigley Field.

Thank you to all our loyal fans, including these #CubsRingBearer winners! pic.twitter.com/mtgmqSuEqm