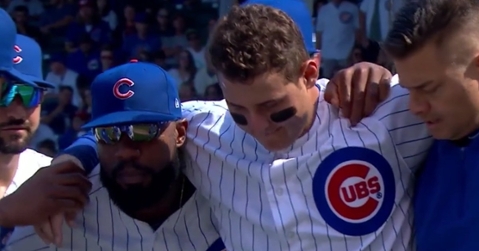 Chicago Cubs first baseman Anthony Rizzo was forced to leave the game after rolling his ankle while charging toward a bunted ball.

CHICAGO — As if the Chicago Cubs were not already facing enough injury issues, Cubs first baseman Anthony Rizzo rolled his ankle while charging a bunt and went down to the ground in pain on Sunday. Rizzo's right foot inverted while Rizzo charged the bunt, which is he known for doing, leading to a sad scene at Wrigley Field.

Somehow, Rizzo was able to ward off the pain long enough to make a throw to first base that was off the mark. As soon as the bunt single was recorded by the Pittsburgh Pirates, Rizzo went down the ground in obvious pain and was eventually helped off the field by a trainer and teammate Jason Heyward. Ian Happ replaced Rizzo at first base.

Oh no - Anthony Rizzo is down after injuring his ankle. pic.twitter.com/HAoB2oyavO

You can say whatever you want about Jason Heyward but one thing you can not deny is how great of a teammate Heyward is. Here he is helping Anthony Rizzo off the field after going down with an injury. pic.twitter.com/KsFxxDLPp2