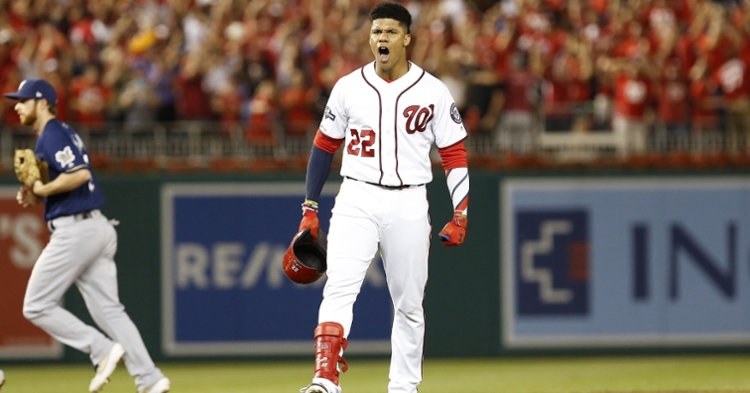 Washington Nationals left fielder Juan Soto cleared the bases with what proved to be the game-winning hit with two outs in the bottom of the eighth. (Credit: Geoff Burke-USA TODAY Sports)

WASHINGTON, D.C. — After putting together a red-hot stretch run that culminated in a postseason berth, the Milwaukee Brewers squandered a 3-run lead on Tuesday and had their 2019 campaign ended as a result. The Brew Crew went on the road for the National League Wild Card Game and lost 4-3 to the Washington Nationals in the winner-take-all duel at Nationals Park.

The Nationals made the debatable decision to start ace pitcher Max Scherzer over National League Cy Young Award frontrunner Stephen Strasburg in the contest, and it nearly cost the Nats. Taking a 3-0 lead in the first two innings via a pair of home runs, the Brewers' offense experienced early success against Scherzer, and Milwaukee did not trail until the Nationals produced a 3-run eighth inning.

In the top of the first, Brewers catcher Yasmani Grandal hit a 2-run home run out to right field that plated Brewers right fielder Trent Grisham, who drew a leadoff walk to start the game. The following inning saw Brewers first baseman Eric Thames go yard with a towering solo blast powered out to center field, which put the Brewers ahead by three runs.

Nationals shortstop Trea Turner lined a solo dinger over the center-field wall in the bottom of the third, with the homer coming at the expense of Brewers starting pitcher Brandon Woodruff. Strasburg pitched three scoreless innings in relief of Scherzer, providing the Nationals with an opportunity to catch up to the Brewers, as Milwaukee closer Josh Hader suffered a 2-out collapse in the bottom of the eighth.

Not long after hitting a batter with one out, Hader got taken for a bloop single and a walk to load the bases with two outs. Grisham has been starting in place of superstar Brewers right fielder Christian Yelich, who suffered a severe knee injury in mid-September. Unfortunately for Grisham, he committed a critical fielding error on a 2-out single by Nationals left fielder Juan Soto, as the ball skirted underneath Grisham's glove, thus clearing the bases.

Soto was so excited by his clutch base knock that he began celebrating in the midst of being caught in a rundown between second base and third base. Soto being tagged out did not matter for the Nationals, though, as Washington relief pitcher Daniel Hudson kept the Brewers at bay in the top of the ninth and finished off the Nationals' 4-3 victory. While the Nationals will next take on the Los Angeles Dodgers in the NLDS, the Brewers' season is over.