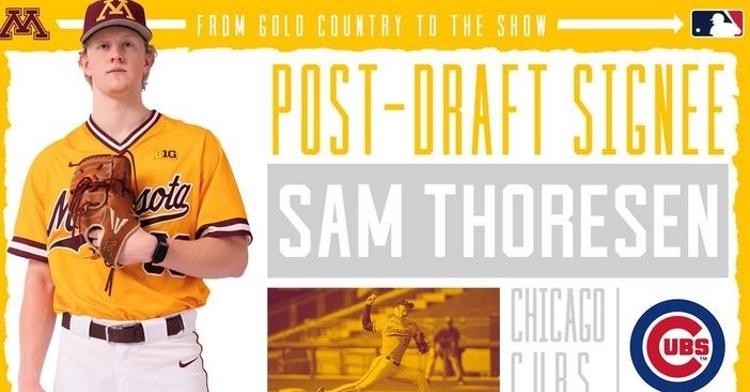 MINNEAPOLIS – Right-handed pitcher Sam Thoresen has reached a verbal agreement with the Chicago Cubs organization and will sign with the team as an undrafted free agent.

With the signing, Thoresen becomes the second Gopher player to strike an agreement with a Major League club in the past week after Max Meyer was selected third overall in the first round of the 2020 MLB Draft. Thoresen becomes the fifth Gopher to start his professional career as a member of the Cubs organization.

As a junior, Thoresen wrapped up his third and final campaign in Maroon & Gold in 2020. Over the course of 91 career innings with the Gophers, Thoresen struck out an astounding 118 batters, translating to a remarkable 11.7 strikeouts-per-nine innings. Thoresen concludes his college career with a lifetime 6-6 record and 5.74 ERA to go along with a .196 batting average against.

Perhaps most worthy of note, the Gopher right-hander set a program record in his 2019 sophomore season by achieving a 13.4 K/9. Among pitchers amassing a minimum of 35 innings, no one has ever struck out batters at a higher rate in any single season in the history of the program.

In the abbreviated 2020 season, Thoresen put a stamp on his career with 19 strikeouts in just 9 1/3 frames (18.3 K/9). Right-handed hitters had a particularly tough time squaring Thoresen up, as they failed to notch a single hit against him (zero-for-16) this past season.

Thoresen also performed well in the classroom during his Minnesota career, having been named to the Academic All-Big Ten team for the 2020 spring semester.

Cubs sign Minnesota RHP Sam Thoresen for 20K, per Baseball America. Ranked 397th on my board. Mostly projection based, long levers, can spin it, but has zero control of his three offerings. If any team can turn him into a late inning reliever, it’s the Cubs. Great investment.

One of the more intriguing NDFA signings today is @GopherBaseball RHP Sam Thoresen to the @Cubs. Thoresen has command issues, but the arm is big-time. Was 92-96 when I saw him earlier this season.