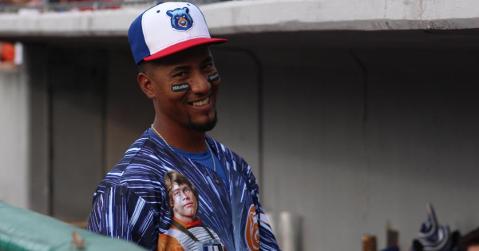 The Chicago Cubs will be calling up infielder Robel Garcia from Triple-A Iowa on Wednesday. In a corresponding move, reliever Dillon Maples will be optioned to Iowa to make room on the roster.

Garcia has been impressive batting .285 with 14 doubles, a triple, 21 homers, and 58 RBIs in Triple-A this season. The 26-year old has moved up from the Smokies all the way to the majors in less than one season of play.

"He's had a hell of a Triple-A season," Theo Epstein said on 670 The Score Thursday.

Garcia can spot start some and can give the Cubs a switch-hitter off the bench. It's worth a shot to see if he can spark the club offensively. He has played all four infield spots at some point in the minors this season.

The last five seasons Garcia was playing in Italy before being scouted by the Cubs.

He was signed by the Indians out of the Dominican Republic in 2010.

It's like deja vu all over again -- Robel Garcia hit his 21st homer of the season last night. pic.twitter.com/GRXEvFggh2

The Robel Garcia story is one of the best in recent memory. We will tell it tonight on our b'cast. The best part of the story is the idea that an minor league player can make it. He earned his way here by being relentlessly terrific as an offensive player at AA/AAA.

Not sure how the Robel Garcia experiment will go in Chicago, but I can say he has consistently crushed fastballs during his time with the I-Cubs.