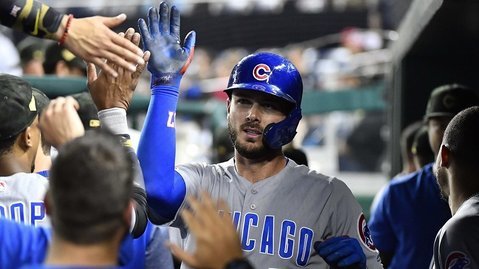 Cubs President of Operations Theo Epstein spoke to reporters on Monday night at the Winter Meetings about various subjects including Kris Bryant's grievance hearing that still has no decision.

"We're fairly confident in what the outcome is going to be, but the timing is a bit frustrating," he said via ESPN's Jesse Rogers. "It would be nice to know. We're at the winter meetings, and there hasn't been a ruling. I understand these things take time. It's not going to be more than a couple weeks away, but it would be nice to have that final confirmation."

Epstein expects for there to be a ruling shortly in the Cubs favor on Bryant's free-agent status (2020 or 2021).

"I don’t think we look for the whole service-time structure to be upended in any one ruling."

The Cubs are reportedly taking offers on members of their team's core, including Bryant.

"We can benefit from some change in certain areas," Epstein said about possible trades. "There are a lot of promising leads out there."

The latest rumor is that the Phillies talked to the Cubs about Bryant on Monday.