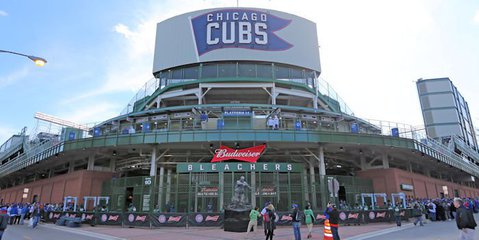 CHICAGO – The Chicago Cubs will return to Wrigley Field for the first time since the All-Star break to host the division rival St. Louis Cardinals July 21-23, followed by the first two games of the Crosstown Cup Series with the Chicago White Sox July 24-25.

Following the homestand, Under Armour will host the country’s top high school baseball players at Wrigley Field for the Under Armour All-America Game Saturday, July 29. The game will start at 7:05 p.m. CDT. Complimentary tickets are available beginning July 20 at the Cubs Store in the Park at Wrigley with a limit of six per person. More information on the game can be found at www.cubs.com/allamericagame.

A limited number of tickets for this homestand remain available at www.cubs.com or 800-THE-CUBS (800-843-2827). Highlights of the homestand follow.

In partnership with the “Play Sun Safe” initiative sponsored by the Pediatric Sun Protection Foundation, Mott 50 and Advocate Children’s Hospital, a member of the Los Angeles pop/rock ensemble R5 will throw a first pitch Saturday, July 22. The initiative aims to raise awareness about sun protection and skin cancer prevention.

On Monday, July 24, Jonathan Kirkland, Chris Lee, Colby Lewis and Wallace Smith from the Chicago company of “Hamilton: An American Musical” will sing the national anthem. Cubs Hall of Famer Ryne Sandberg will throw a first pitch and lead the stretch.

On Sunday, July 23, up to the first 5,000 fans age 13-and-younger will receive a Clark the Cub Pocket T-shirt presented by Mastercard.

Jeff Mauro, host of Food Network’s “The Kitchen” and Pork & Mindy’s executive chef and partner, will bring his creative BBQ chops and sandwich prowess to the Chef Series at Wrigley Field presented by Maker’s Mark. The following menu items will be served July 21-25 at the Sheffield Counter (formerly Decade Diner) near Gate D:

Hot Doug’s continues its rotating selections from Platform 14, located behind the center field scoreboard in the Budweiser Bleachers. Served this homestand are the Bill Caudill, an Argentinian pork and bacon sausage with chimichurri and Swiss cheese; the Sergio Mitre, a gyro sausage with tzatziki, feta cheese and chopped tomatoes; and the Rick Reuschel, a jalapeño-cheddar beef sausage with jalapeño mustard, pepper jack cheese and crispy fried onions.

For more information on the Wrigley Field Chef Series or other concession items in the ballpark, fans can visit www.cubs.com/food.

On Friday, July 21, Cubs manager Joe Maddon will continue his support of Chicago nonprofit organizations through his “Respect Community” T-shirt initiative. After every Friday home game, Maddon represents a different Chicago nonprofit by wearing the organization’s T-shirt during his postgame press conference.

This week, Maddon will represent Chicago Scholars, an organization committed to transforming the leadership landscape in Chicago by resolving the fundamental barriers to success for academically driven, first generation college students from under-resourced communities. Chicago Scholars is the largest college access and success program in Chicago serving more than 2,400 scholars annually in a seven-year college access, mentoring and career support program.

On Wednesday, July 26, the Cubs leadership team and front office associates will host a signing ceremony for the 2017 Cubs Scholars class and celebrate college selections of the 2016 class. The 2017 class includes five Chicago high school seniors selected based on the Cubs Scholars criteria. The students will collectively receive $100,000 in scholarships and a Cubs College Prep program where they will be paired with a Cubs associate who serves as a mentor as they prepare for college. In addition to Cubs College Prep, Cubs Charities will sponsor each of the five Cubs Scholars in a five-year college preparation and persistence program offered by Chicago Scholars.

· National anthem: Cast members from the Chicago company of “Hamilton: An American Musical”