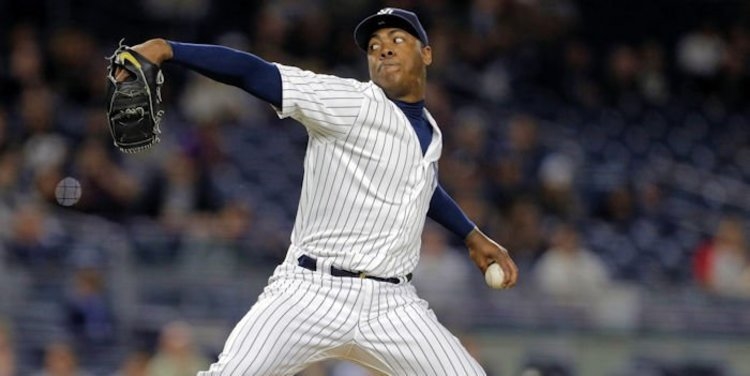 Former Chicago Cubs closer has re-signed with the New York Yankees for a five-year contract with $86 million. The contract was a record amount for a closer.

"I love the organization, they welcomed me with open arms, and that's why I decided to go back," Chapman told ESPN during the offseason. "I was hoping I had a chance to go back, and it happened."

The Cubs decided to not re-sign Chapman and went a different route by trading Jorge Soler for closer Wade Davis during the offseason. Both roster decisions seem like savvy and the correct ones as the Yankees placed Chapman on the 10-day disabled list on Sunday with left shoulder rotator cuff inflammation.

Most fans thought that Chapman's arm was ready for some type of injury after the heavy workload with his one-of-a-kind rocket arm the last few seasons. He was 4-1 with a 1.55 ERA with 36 saves and 90 strikeouts during the regular season in 2016. In the postseason in 15.2 innings, he had a 3.45 ERA with four saves while striking out 21. Regardless of your view of Chapman, he was a pivotal reason that the Cubs won their first World Series in over 108 years last season.