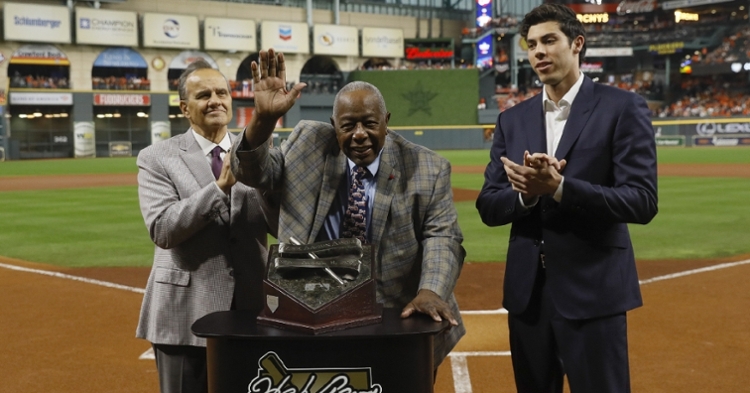 Tough news to report today as baseball lost another legend and pioneer.

Hall of Famer Hank Aaron has passed away this morning at the age of 86.

Muhammad Ali once said the following about Aaron, "The only man I idolize more than myself."

Aaron was one of the most iconic players in the history of baseball as he finished his career with 755 home runs in a non-steroid era, second all-time to Barry Bonds' 762.

Hammerin' Hank was also an MLB-record 21-time All-Star (25x total) and had an impressive 3,771 hits. He was a model of consistent play as he slugged 24 to 47 homers for 19 straight seasons.

“We are absolutely devastated by the passing of our beloved Hank. He was a beacon for our organization first as a player, then with player development, and always with our community efforts. His incredible talent and resolve helped him achieve the highest accomplishments, yet he never lost his humble nature. Henry Louis Aaron wasn’t just our icon, but one across Major League Baseball and around the world. His success on the diamond was matched only by his business accomplishments off the field and capped by his extraordinary philanthropic efforts.

We are heartbroken and thinking of his wife Billye and their children Gaile, Hank, Jr., Lary, Dorinda and Ceci and his grandchildren.”

"We are devastated by the passing of Hammerin’ Hank Aaron, one of the greatest players and people in the history of our game. He was 86."

Against the Cubs, he feasted on them hitting .337 over 179 games including 50 home runs at Wrigley Field. Overall, he homered off 310 pitchers including 13 Hall-of-Famers.

RIP, No. 44, and prayers to his family, friends, and the entire baseball community.

Hall of Famer, former home run champion and Braves icon Hank Aaron has passed away at the age of 86. pic.twitter.com/3oWluZA2F4

Hall of Famer and @Braves slugger Henry “Hank” Aaron has passed away this morning at the age of 86.

Rest In Peace to a baseball legend. pic.twitter.com/XHXqRAHw6C

This photograph of the immortal Hank Aaron was taken in Washington DC, 2015: pic.twitter.com/ZV79vpAK5P

Lifelong Browns fan Hank Aaron used to quietly fly from Atlanta to Cleveland and sit in the Dawg Pound on Sundays.

Godspeed to another baseball legend in Hank Aaron. Seen here hitting in the 1957 World Series when he smacked 3 HRs and hit .393 in leading Braves to title in seven games pic.twitter.com/nXvkw3NLJa

When Hank Aaron broke Babe Ruth's home run record on April 8, 1974, it was and remains one of the most iconic moments in sports history. No matter how many times I've seen it throughout my lifetime, I'd always stop and watch it again. That moment is immortalized at Truist Park. pic.twitter.com/LAJE6HPAoV

This was the only time I was in a room with Hank Aaron. I was so flabbergasted and speechless I’m surprised I was able to take the picture. A true American hero. RIP to the ??, and thank you. pic.twitter.com/AtS4wYHGrT

Hank Aaron worked his entire life to reach the Major Leagues and dealt with much tribulation along the way.

The night he broke Babe Ruth’s home run record will forever go down in history. RIP to a Legend ?? pic.twitter.com/dUoRrXh2g1

Hank Aaron, departing to play for the Indianapolis Clowns, 70 years ago. I remember pausing with ?@nlbmprez? in front of this photo at the ?@NLBMuseumKC?. I’ve never forgotten this image. (Additional photo credit: ?@Baseballography?.) @MLB ?@MLBNetwork? pic.twitter.com/INIIVJEjeK

Hank Aaron’s legacy is in a class of its own:

RIP to a legend. pic.twitter.com/plyxnkdHuD