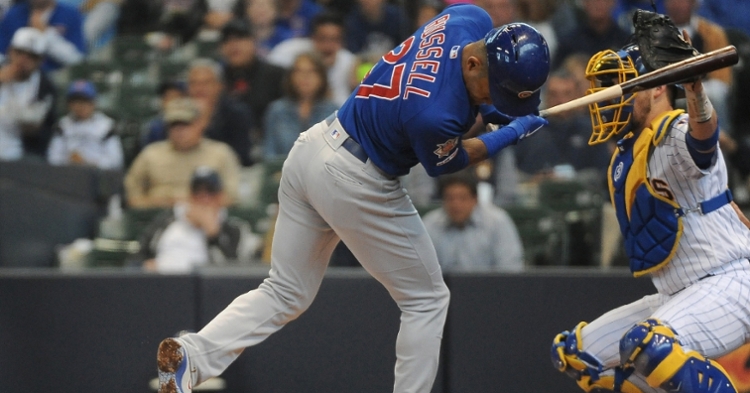 Addison Russell suffered concussion-like symptoms and a nasal contusion due to being hit in the head by a pitch. (Credit: Michael McLoone-USA TODAY Sports)

MILWAUKEE — The Chicago Cubs have been dealing with several injury issues recently, and one more was added to the list when shortstop Addison Russell was drilled in the side of the head with a pitch on Sunday. Russell went down to the ground in obvious pain after the pitch grazed the brim of his batting helmet and subsequently made contact with his face.

Surprisingly, Russell avoided suffering a major injury and remained in the game for the rest of the half-inning. He even stole a base and came around to score the Cubs' first run. However, Russell was taken out for precautionary reasons thereafter and underwent concussion tests. Following the Cubs' 8-5 loss to the Milwaukee Brewers at Miller Park, the Cubs announced that was Russell was under evaluation for concussion-like symptoms and had suffered a nasal contusion, which was presumably caused by Russell's batting helmet contacting Russell's nose on the hit by pitch.

Cubs third baseman Kris Bryant did not play in Sunday's contest, and Cubs manager Joe Maddon told the press prior to the game that soreness in Bryant's knee was the reason why. Bryant has been dealing with a recurring knee issue since the All-Star break, and Maddon said that Bryant was rather sore after Saturday's outing. For now, Bryant and Russell are both considered day-to-day.

On the pitching front, Cubs closer Craig Kimbrel is currently on the injured list because of elbow pain and is available to be activated off it this coming Thursday. It was reported that Kimbrel played catch at Miller Park on Sunday, marking his first public workout since being placed on the injured list this past Thursday. Kimbrel is expected to return to the Cubs' bullpen as soon as possible.