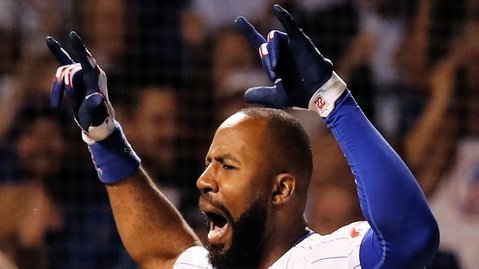 Jason Heyward was brutally honest when asked about what he and his teammates think about the Brewers-Cardinals series. (Credit: Jim Young-USA TODAY Sports)

CHICAGO — Right now, the Chicago Cubs are caught up in an intense playoff hunt, as the North Siders are four games behind the St. Louis Cardinals and one game ahead of the Milwaukee Brewers in the standings. While the Cubs still have a chance of catching the Cardinals atop the National League Central, they are also working to hold off the Brewers in the wild-card race.

The Cubs are currently taking part in a 3-game series at Wrigley Field against the Pittsburgh Pirates, and the Brewers and the Cardinals are presently facing off as part of a 3-game set at Busch Stadium. Cubs outfielder Jason Heyward was interviewed in the locker room by NBC Sports Chicago reporter Kelly Crull, and Crull asked Heyward about the Brewers-Cardinals series, to which Heyward bluntly responded that the Cubs "don't give a s---."

Heyward made the point that there is still too much baseball left to be played for the Cubs to worry about how other teams fare. With just over two weeks remaining in the regular season, the Cubs are assuredly cognizant of the importance of each game that they play from here on out, but Heyward said that, for the time being, the Cubs are strictly focused on winning their own ballgames and not at all concerned with the outcomes of other contests.

How are the Cubs viewing this weekend's Brewers-Cardinals series?

"We don't give a s*** about what anybody else is doing." Jason Heyward said. pic.twitter.com/p5N688WrEh